The facade above the Maynard Outdoor Store features a panel that reads "CASE BLD 28."  Historic records show that the main building, at , was once known as the Case Block, and next door, as the Case Annex. The main building has a 112 year history.

The story starts when William B. Case moved from to Maynard in 1874, age 22, to take a job at the Hayes store. Five years later - 1879 - he started his own store. By 1887 his business was in a larger space in the building at . And five years after that he had a grand opening in his own new building, at the address, as W.B. Case & Sons, dry goods. Newspaper advertisements of the era show the store as selling clothing, shoes, hats, gloves, etc.

Case prospered. He had married Lucy Jane Whitney in 1877; she was of a well known and well off family that had been in the area for centuries. Her great-great-great-great-great-grandparents were among the first landowners in , in 1683. Her father, Artemas Whitney, built the dam for the woolen mill. William and Lucy lived in a mansion at . Howard and Ralph, their two sons, helped manage the store.

In the collection of the Maynard Historical Society there is an interesting description of how the store operated. When salesclerks made a sale, the sales slip and the customer's money was placed in a small basket. This slid on a downward angled overhead wire to the manager at the back of the store who manned the only register. He would write a receipt and send it, with the customer's change, back on the same wire by raising his end to a higher hook.

Town records have no information on when the store closed. The last Maynard newspaper mention was of the 50th anniversary, in 1929. A brief item in the paper mentions a clearance sale in 1935. The mill and the town were in hard times as the Great Depression dragged on, so the store probably closed its doors soon after.

What is known is the next mention of business at (not including the Annex) was the grand opening of an A&P "supermarket" on January 8, 1942. The woolen mill was busy providing the military with uniforms and blankets, and the town was prospering again. A&P (short for The Great Atlantic & Pacific Tea Company) was the Walmart of its era. Its self-service stores, with sections that provided groceries, baked goods, meat, produce and dairy, plus its low prices and preferential selling of its own A&P branded products, put thousands upon thousands of small shops and suppliers out of business.

From 1915 to 1975, A&P was the largest food retailer in the nation. But it failed to keep pace with new chains that opened larger, modern supermarkets in the suburbs, with their own parking lots. A&P still exists, but with only 300 stores in a handful of eastern states, it is a pale shadow of its 16,000 store peak.

Maynard's A&P closed in 1967. The next tenant was the one we know today. After World War II, three ex-servicemen started a small chain of Army & Navy Surplus stores in , and Maynard - that last one opening in 1950. The Maynard store was on , in one of the storefronts just south of the Peoples' Theatre building. A year after A&P closed, the Army & Navy business moved to that site and about the same time changed its name to the Maynard Outdoor Store, one reason given being that Levi Strauss & Co. would not sell jeans to Army & Navy stores.

Back then, the upstairs was office space, rented out to various tenants. Now, the Outdoor Store uses it for storage of inventory - come spring the parkas, sleds and Patriots clothing will disappear, to be replaced by polo shirts, swimsuits and Red Sox gear. 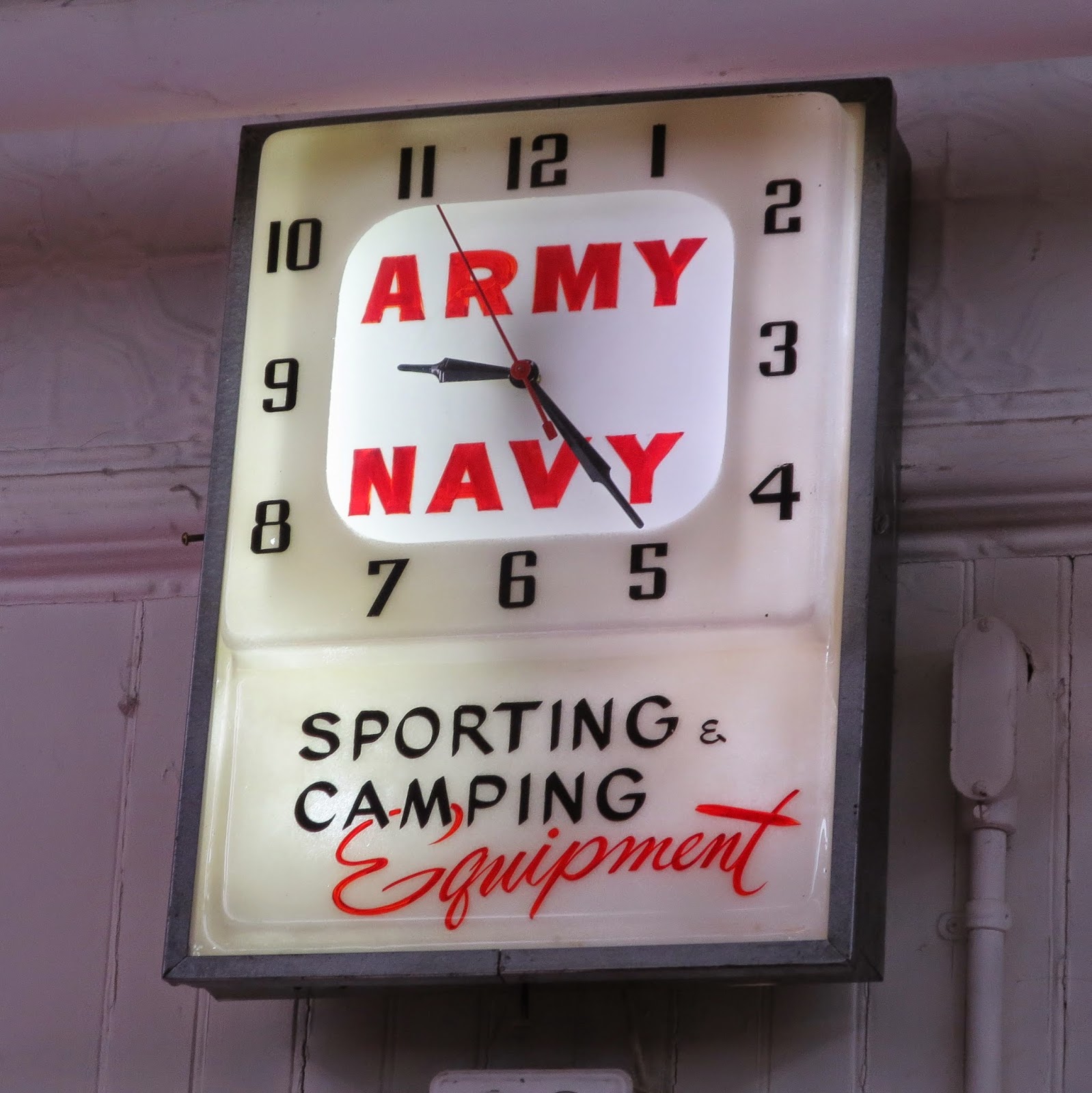 A clock over the front door dates back to the Army & Navy days; the pressed tin ceiling in the south building in all likelihood dates back to W.B. Case & Sons.

Today, we still have the Maynard Outdoor Store as one of the major retail businesses in downtown Maynard. Family owned, the store offers clothing and shoes for children, women and men, plus a wide range of sports and camping equipment. The Outdoor Store's stated goal is "To be #1 in Service, Savings, Selection." Which is likely the same approach that had kept family-owned Case & Sons in business for more than 60 years, selling much the same type of product.