SNOW - a Record Year for Boston

Snowfall measurement methods are described in great detail in a 14 page document from the National Weather Service. Briefly, if snow is falling continuously, depth in the measuring device is measured every six hours, the device emptied and set out again. This maximizes measurement for large storms because it reduces the compression effect of late snow piling up on early snow. 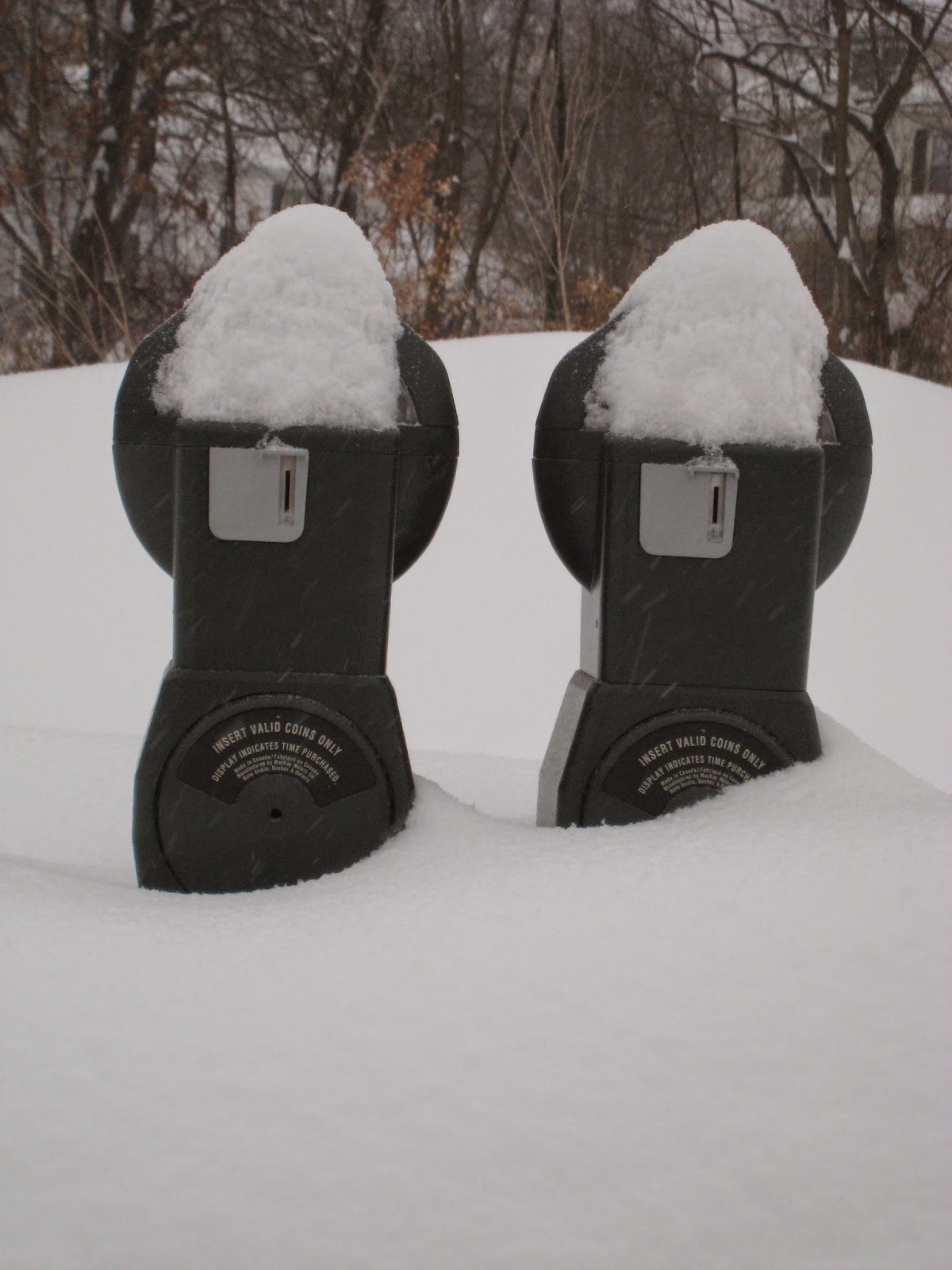 One reason for the records being set this winter is that all snow is not created equal. Wet snow means 6-8 inches convert to one inch of water, but the northeasters that have been repeatedly sweeping through our area have been cold enough to generate powdery snow that is averaging 17-18 inches per inch of water. Telling here is that the thirty days of storms that put so much snow on the ground will in time melt to only five inches of water - above average for this time of year but in no way record setting.

Other reasons are meteorological. Weather forecasting professionals toss about terms such as North Atlantic Oscillation, the "Ridiculously Resilient Ridge" and Polar Vortex.  The net result was that over a short period of time the storms were colder, larger, and every storm dumped on eastern , with little melting between storms. February 2015 was Boston's second coldest on record. For the entire month, an average of 18.8 (F) and only three days had a high temperature above freezing.

Whatever happened to global warming? The short answer is that is getting wetter faster than it is getting warmer. For , over a 120 year period the average temperature has gotten one degree (F) warmer, but 10 percent wetter. As a result, winter is two weeks shorter, but six of the top ten snowiest winters have occurred in the last 22 years. As storms track up the east coast the warmer (and thus wetter) air over the ocean blows inland over/atop cold air, resulting in more snow.

At some point in the future the temperature trend will mean more winters of wet snow, sleet, ice storms and rain. has already experienced the crossover: weather records dating back to 1870 show two degrees of warming, a 15 percent increase in total precipitation, but a decrease in annual snowfall from 75 to 65 inches. When it comes, the crossover will affect before it impacts the inland cities and towns. 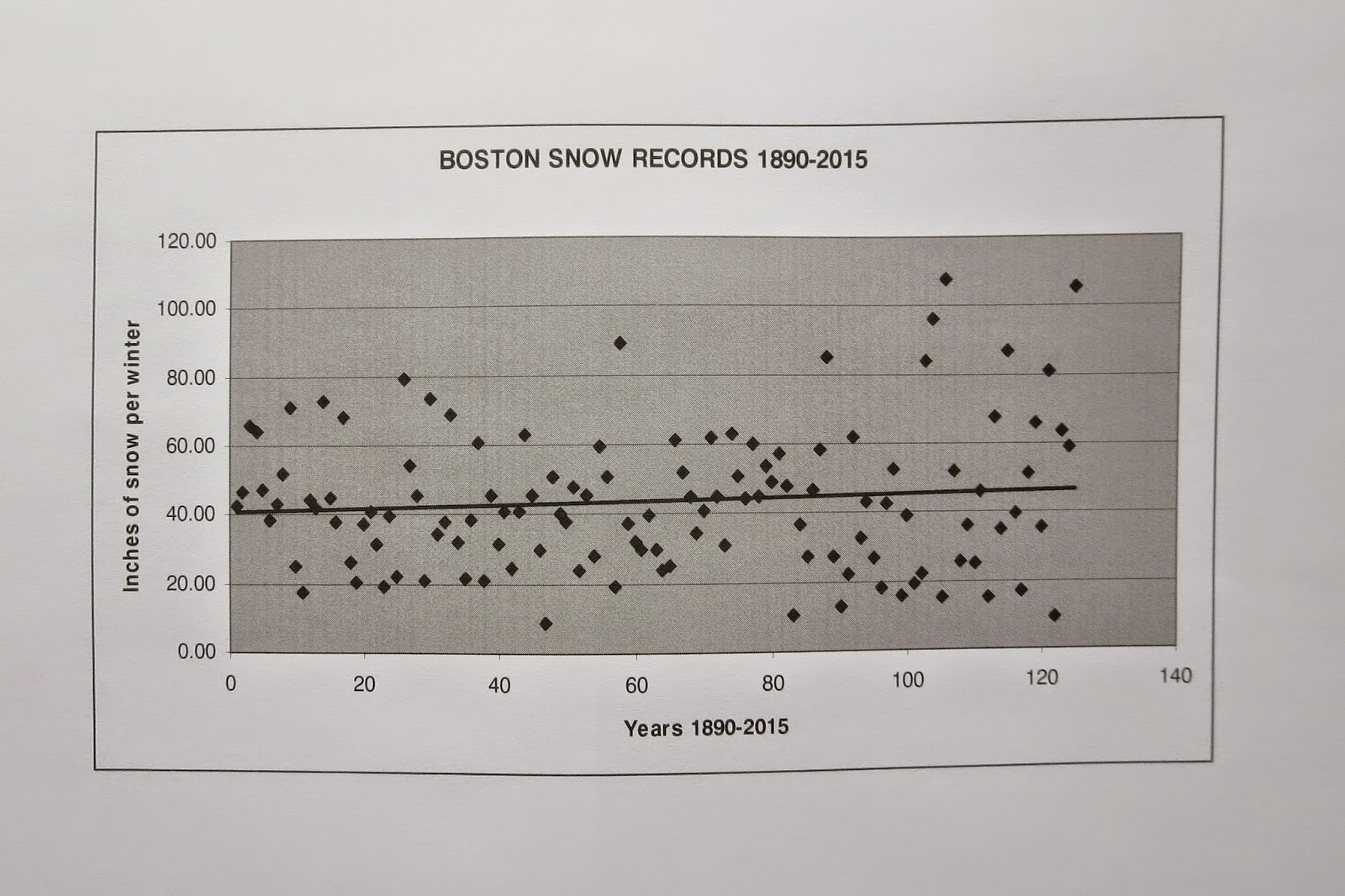 The first paragraph of this column was a riff on the "But it is not this day" pre-battle speech in The Lord of the Rings: The Return of the King. Other fictional pre-battle speeches to outnumbered, underdog troops include those from movies Braveheart and Independence Day, and the progenitor of them all, the St. Crispin's Day speech from Shakespeare's play, Henry V. That speech gave us five repeats of "...this day..." and also the line "We few, we happy few, we band of brothers..."

The Lord of the Rings/The Return of the King (Lord Aragorn speaking)
Sons of Gondor, of Rohan, my brothers!
I see in your eyes the same fear that would take the heart of me.
A day may come when the courage of Men fails,
When we forsake our friends and break all bonds of fellowship,
But it is not this day.
An hour of wolves and shattered shields when the Age of Man comes crashing down,
But it is not this day!
This day we fight!
By all that you hold dear on this good earth,
I bid you stand, Men of the West!


What's he that wishes so?
My cousin Westmoreland? No, my fair cousin;
If we are mark'd to die, we are enow
To do our country loss; and if to live,
The fewer men, the greater share of honour.
God's will! I pray thee, wish not one man more.
By Jove, I am not covetous for gold,
Nor care I who doth feed upon my cost;
It yearns me not if men my garments wear;
Such outward things dwell not in my desires.
But if it be a sin to covet honour,
I am the most offending soul alive.
No, faith, my coz, wish not a man from .
God's peace! I would not lose so great an honour
As one man more methinks would share from me
For the best hope I have. O, do not wish one more!
Rather proclaim it, Westmoreland, through my host,
That he which hath no stomach to this fight,
Let him depart; his passport shall be made,
And crowns for convoy put into his purse;
We would not die in that man's company
That fears his fellowship to die with us.
This day is call'd the feast of Crispian.
He that outlives this day, and comes safe home,
Will stand a tip-toe when this day is nam'd,
And rouse him at the name of Crispian.
He that shall live this day, and see old age,
Will yearly on the vigil feast his neighbours,
And say 'To-morrow is Saint Crispian.'
Then will he strip his sleeve and show his scars,
And say 'These wounds I had on Crispian's day.'
Old men forget; yet all shall be forgot,
But he'll remember, with advantages,
What feats he did that day. Then shall our names,
Familiar in his mouth as household words-
Harry the King, and ,
and Talbot, and Gloucester-
Be in their flowing cups freshly rememb'red.
This story shall the good man teach his son;
And Crispin Crispian shall ne'er go by,
From this day to the ending of the world,
But we in it shall be remembered-
We few, we happy few, we band of brothers;
For he to-day that sheds his blood with me
Shall be my brother; be he ne'er so vile,
This day shall gentle his condition;
And gentlemen in England now-a-bed
Shall think themselves accurs'd they were not here,
And hold their manhoods cheap whiles any speaks
That fought with us upon Saint Crispin's day.

Maynard's oldest buildings still standing were not the oldest built. Modest farmsteads located along the roads connecting the older towns of , , and were torn down and replaced with larger homes as the original settlers prospered. Later, with the advent of the paper, gunpowder and wool mills, houses close to the center of Assabet Village (not yet officially Maynard) were replaced by mill worker housing. More old farmsteads were lost when the government seized most of southern Maynard for Army use as a munitions depot during World War II.

What remains is a scattering of upper middle-class homes, some once owned by descendants of John Smith (1622-1687). John came from to the colonies in 1638. Nine years later he was married and living in . Our lineage of interest is John to Thomas to Amos, then to two of Amos' six children - Benjamin and Jonathan - and their children and grandchildren. Note that 'named' houses are not always named after the original owners.

Descriptions of houses built in the late 1700s can wax eloquent about Georgian or the subsequent, more decorative, Federalist style of architecture, but the core of both designs is a rectangular 2.5 story house, five windows wide, two windows deep, centered front door, and either a large central chimney or twin chimneys. Each chimney has more than one fireplace in service of different rooms, including upstairs rooms. Windows are small and multi-pane. Additions are common, sometimes extending so as to link the house to what had been a separate barn or carriage house. (A style known as New England Connected Farm.)

William Smith House, (1780): First owner not known, but William Smith (Benjamin's son) lived there a long time. In 1892 the Town of purchased it for an almshouse. According to one history, "Here, Maynard's indigents and transients were fed and housed. Those who were able-bodied labored on the 20 acre town farm to produce food for themselves and other needy townspeople. They also chopped wood to heat the schools and other public buildings." The farmland is now the athletic field. 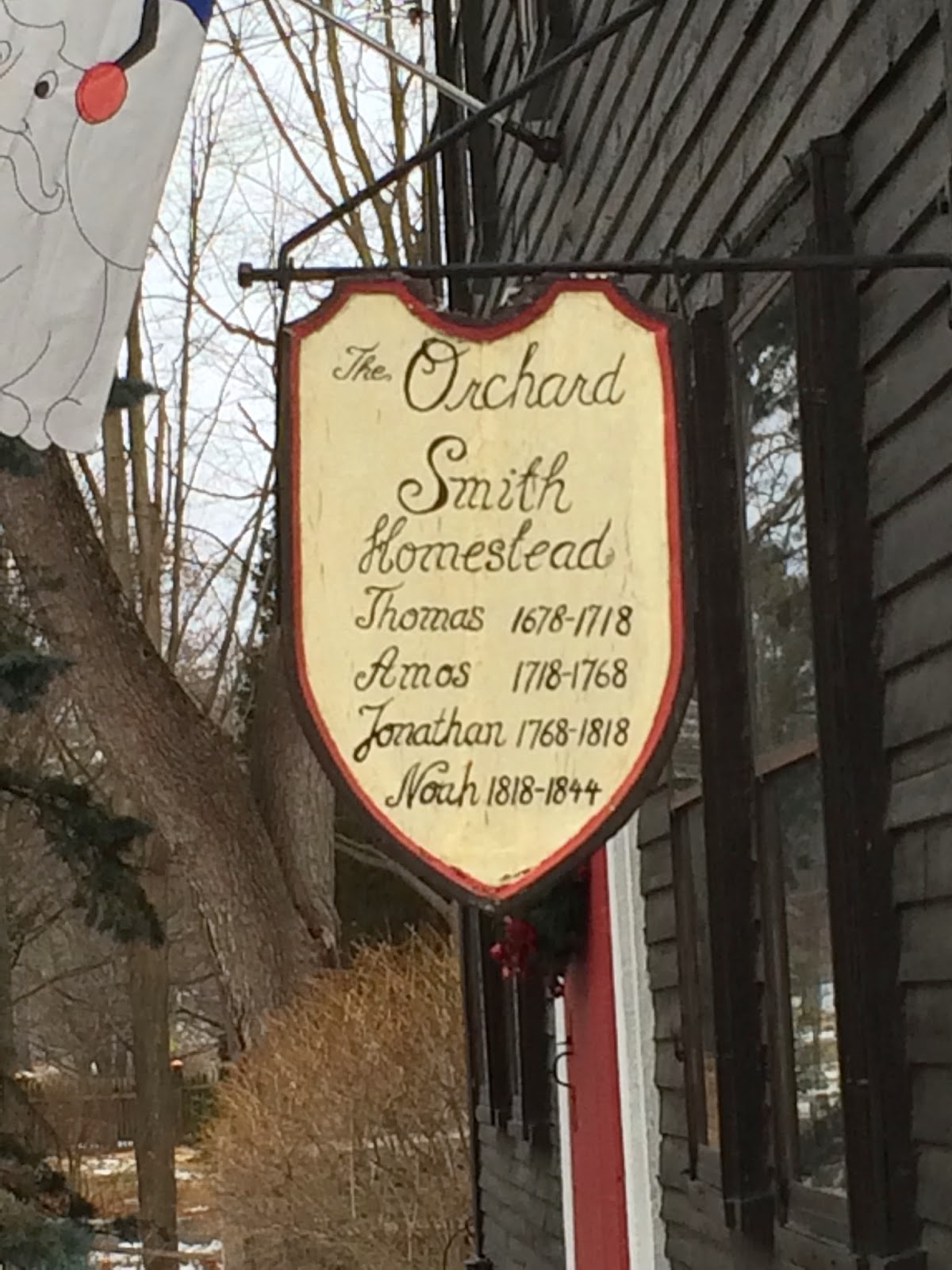 Levi Smith House, (1770): Central chimney and later additions. It was built for Jonathan Smith and then sold to his son Levi in 1810. After the bridge over the was built in 1816, Levi operated his house as a tavern - the Red Fox Inn - until his death in 1848.

The dark brown house two houses to the west, sporting a sign, "The Orchard," dates to 1810, its ownership going from Jonathan to another son, Noah. Ownership of the land the house is on dates back to Thomas Smith, Jonathan's grandfather.

George Smith House, (1785):  First owner not known, but George lived here next door to his father Haman, who was at (built 1835). That house went from Haman to another son - Benjamin - who was named after Haman's father. Both houses started as Federal style, with five windows across the front over a centered door, plus many subsequent additions and outbuildings. The (1816) was named after the first Benjamin while the nearby Ben Smith Dam (1846), built for the wool mill, was named after the second Benjamin, his grandson.

Asa Smith House, (1780): There is a dispute here, as there are claims for 1780, but the plaque on the house reads circa 1820. Asa lived in this house and owned the dam and mill, which was used for grinding grain, pressing cider and sawing lumber. This house was the first place Amory Maynard lived when he moved to . Along with the house, Maynard bought the water usage rights, then had much of the river's volume diverted via a canal to the mill pond for his new wool mill. Before Asa Smith, the mill, if not the house, had been owned by Joseph Jewell and then his son John, and was known as "Jewell's Mill" from 1694 to 1815. And the oldest: Silas P. Brooks House, 88-90 Summer Street (1764): Georgian style architecture, with a large central chimney and many subsequent additions. It was built for Luke and Lucy (Wheeler) Brooks. Luke was in the militia company that marched to the morning of April 19, 1775; he later served as a Private in the Revolutionary War. His son and Silas' son Silas Potter Brooks (1815-1888), inherited the house. Silas P. was one of the signers of the 1871 petition to form the Town of (as were two other Brooks and seven Smiths).

The Brooks family owned lots of land on the north side of Maynard, including what became . Charles Brooks was the first resident of my house. A deed in the county courthouse shows A&L Maynard Company selling the property to Charles Brooks in 1870 for $2,430. The 1870 U.S. Census described him as a 56 year old widower working at a saw mill, with four teenage daughters. While digging a garden bed we found a small glass bottle that had held "Bachelor's No. 1 Liquid Hair Dye." Perhaps Mr. Brooks was darkening his grey hair in the hopes of finding a second wife.

Honorable mention: the house at 101 Summer Street is part brick construction. The one story brick portion, painted white and close to the road, was District #5 school house for Stow, completed prior to 1789 (possibly as early as 1766?) and in operation as a school until 1872. Many of the town's founding families sent their children there, including Amory Maynard.
Posted by David Mark at 5:27 PM No comments: