This article covers construction plans, timing, problem spots and current status of the unpaved parts, followed by a walking guide to the Acton, Maynard and Stow sections. See February 2016 column for more detail on recent news.

2015 NEWS: As of Sept 21, 2015 the section at the north side of Maynard (north of Concord Street) cannot easily or safely be walked, as there is ongoing storm sewer pipe installation construction.


2014 NEWS: All rails were removed from the Acton and Maynard sections in March/April.. The company paid the towns for the rails, to be sold as scrap steel.

On June 13, 2013 there was a public hearing on the planned design of the parts of the Assabet River Rail Trail to be built in Maynard and Acton. The meeting was at Clock Tower Place, Maynard. About 80 people attended. After a 30 minute presentation, primarily slides of sections of the proposed design, there were 90 minutes of questions and answers. Here is a link to a pdf of the planned design: http://www.arrtinc.org/design/ARRT%2025percent.pdf.

The next construction project, scheduled to start in late summer 2016, is to build the trail from the north terminus, near the  train station, southward across all of Maynard to the Maynard/Stow border. When this section is completed it means there will be two finished sections of the 12.5 mile long trail with a gap in the middle. The south section, completed in 2006, extends 5.8 miles from  to downtown . The north section will extend 3.4 miles, leaving a 3.3 mile gap. Existing roads connect the south and north sections, so with on-road detours it will be possible to ride the entire trail. Currently, it is possible to hike all of the north section (and mountain bike most of it).

The purpose of the June 2013 meeting was to become familiar with and comment on the proposed design, referred to as the 25% design. Questions and comments can be clumped into several categories:

A) UNPAVED: Can parts be left unpaved (perhaps covered with crushed stone) and/or not so wide, so to be wilder? The answer to this is "No," primarily because the Americans with Disabilities Act (ADA) requires that federally funded transportation facilities, including trails, be handicap accessible. Emergency vehicles need to be able to travel on rail trails in case there are injuries.Unpaved trails also require more frequent maintenance.

B) PARKING: People living near where there are proposed parking lots were concerned about the traffic that parking will generate. That includes a 20 space parking lot near Ice House Landing, Maynard. Earlier plans had indicated parking on High Street (Maynard) but that does not appear to be in the current plan. This lot revised to be 12 spaces.

On the other hand, planned parking at the Acton end - only eight spaces - was thought by many to be woefully inadequate. Using the train station parking for weekend recreational access to the Trail will be a poor alternative, as it would require detouring around on roads or using the soon-to-be-built elevator crossing from the north side of the tracks (the parking) to the south side (the Trail).

Sylvia Street, Acton, is a narrow dead end street with informal (small footbridge) access to the Trail now. The proposed design shows paved access to the Trail, but no planned parking area. The homeowners on Sylvia could find themselves faced with an increase in vehicle traffic and non-resident parking.  A small parking lot later added to plans.

C) SAFETY: Three sections got many comments about safety problems. The Trail has to cross Route 117 at or near Winter Street, Maynard. If there was a new bridge over the canal (not in the current plan) then the crossing would be farther west, providing more time for crossers to see what traffic is approaching from the east on Route 117. An alternative is to have the Trail border Winter Street and install an actual traffic light on Route 117, so crossers could trigger a red light by pressing a button.

The second section of concern was how to get from the footbridge behind the Maynard Post Office to the far side of Summer Street, as this covers the very busy parking lot behind CVS, Subway, the Outdoor Store and the Paper Store. Suggestions ranged from creating a wide sidewalk on the south or north side of the parking lot to just saying "to hell with it" and letting people wend their way up the middle of the parking lot. Trail will border west side, and some parking spaces lost.

The third section of concern is where the Trail emerges from behind Cumberland Farms gas station to cross that small grassy area and then cross Concord Street, as lots of vehicle traffic turns onto or off from Route 27 and Acton Street to Concord Street. This is already the second-most traffic accident prone intersection in Maynard; adding non-vehicle traffic will only make it worse.

D) NIMBY: There were some mild "not-in-my-back-yard" comments, mostly along the lines of with so many trees being cut down, homeowners next to the Trail will lose visual privacy. One solution might be to plant a hedge now, so that it will be mature by the time the Trail is built. No one at the meeting was against the Trail itself, only concerned about minimizing impact on their privacy. A representative of Clock Tower Place was concerned about the loss of existing parking lot space for CTP tenants. Although no one from Railroad Street showed up to comment, there will loss of greenspace fronting Railroad Street which is now used by the tenants as a recreational area, and much more non-vehicle traffic than currently passes by this area.

E) GETTING AROUND BUILDINGS ON ROUTE 27: In Acton, the Paper Store office complex on Route 27 in  sits athwart the old railroad right of way. Two ways around were proposed – behind the building on a long boardwalk elevated above the swamp, or in front of the building. The latter option is in the latest proposal as it is far less expensive.

Construction will begin in summer of 2016. When completed, hopefully within a year, or latest by early 2018, this section will be 3.4 miles long, from the South Acton train station in the north to the Maynard/Stow border in the southwest. At the southwest end it will connect to the Assabet River National Wildlife Refuge, which offers miles of bike-allowed trails. The majority of the pavement will be 12 feet wide, bordered by 2 foot shoulders. Due to space constraints, several short sections will be 8 or 10 feet wide, some bordered by railings in lieu of shoulders. As part of the project, Maynard's footbridge over the Assabet River will be replaced. with a 16 foot wide steel bridge. Estimated cost for the project is 7.0 million dollars. (Really.) Accepted bid was $6.7 million. 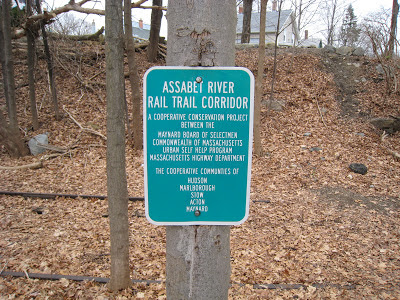 This project is only part of the proposed Assabet River Rail Trail. A 5.8 mile section in Hudson and Marlborough has been open since 2005. The east end of that is a Trail parking lot next to Route 62, in Hudson. Adding the proposed 3.4 miles brings the total to 9.2 miles, but leaves a 3.3 mile section in Stow and Hudson missing. That section has problems: it will need two bridges over the Assabet River, and significant portions of the old railroad right-of-way are currently privately owned.

Maps of the Maynard and Acton sections are at the website www.ARRTRinc.org along with updates on the status of the entire trail, locations of monthly meetings, and plans for volunteer efforts to keep the unbuilt portions of the Trail walkable.
Please consider joining ARRT and participating in various volunteer efforts.

From downtown Maynard going north, start at , at the corner of Summer and Maple. Roundtrip distance will be 3.6 miles. The first section was cleared and woodchipped between the rails by ARRT volunteers in 2002. It used to get a new layer of woodchips every 2-3 years; practice stopped 2012..

Past Cumberland Farms gas station the Trail crosses  and continues behind Artisan Automotive. Look for a green and white ARRT sign. The south end of this section does not drain well after heavy rains (see photo), so you may have to backtrack and detour up Route 27 past Duncan's Beamers (motorcycle shop). Rails were removed in 2014 but the ties are still in place. Not walkable as of Feb 2016 due to construction debris blocking the trail.


There is another access point at the northern end of Maynard, where  meets Route 27. The trail continues north into Acton, and can be managed on an off-road bicycle by someone with modest off-road skills (it starts easy and gets harder). Take the trail north, detour around the front of the Paper Store office complex, reconnect with the trail by going over a berm, and then continue north all the way to Maple Street, Acton. There is also trail access in Acton from the end of Sylvia Road.

North of the trestle bridge there are two options. Go straight, and the access to Maple Street requires climbing up a steep embankment which can be precarious, especially when wet from rain, ice or snow. Or cut left and skirt the edges of a farm field to access Maple Street farther west.

Getting to or from the northern end requires crossing an old trestle bridge. There are no railings, and the gaps between the rotting wooden railroad ties that you will be walking on are large enough for a misstep to plunge between. Ouch! The waterway being crossed over here is Fort Pond Brook, which is part of the Assabet River watershed.

By mid-summer all of the  section is partially overgrown with grasses and poison ivy, especially north of the trestle bridge. Deer ticks are a problem.

To go south, again start at . Head down the parking lot behind the Outdoor Store and CVS, cross the footbridge, and continue on . Cross Main Street, continue west to Sudbury Street, left on Sudbury, then an immediate right onto High Street. Partway down High Street on the right is an ARRT sign marking the beginning of another section where the rails were removed in 2014 but the ties left in place.

At the far end, turn left on Mill, left again on Route 117, cross Route 117 to continue west on Winter Street, then take a right fork onto a dirt road. This is the beginning of

EXISTING PAVED TRAILS (ARRT AND OTHER)

For those who cannot wait, the completed south end of ARRT and the 6.8 mile completed piece of the Bruce Freedman Trail running from Westford to Lowell and the 11.0 mile long Nashua River Rail Trail running from Ayer to Dunstable currently offer paved riding opportunities – at least until snow accumulates. And then snowshoeing or cross-country skiing. All have trailside parking.

ARRT offers a blue caboose, two river crossings, passage between stone abutments, a tunnel under I-290, and an overlook providing a view of the Fort Meadow Reservoir. Amory Maynard’s sale of the Fort Meadow water rights to the City of  in 1845 as a water supply was the making of his fortune. Amory pooled his money with William Knight, who had also sold water rights to , so together they could start up a carpet mill on the .
Posted by David Mark at 7:41 AM