A column published earlier this year explored counting the dead in Maynard, or more specifically, counting the dead who were buried in Maynard's cemeteries. This column addresses those born here. Birth and death information in the chart was taken from Town of , 1880-2012, available at the Maynard Public Library. The population line, scale shown on the right side of the figure, comes from U.S. Census data. 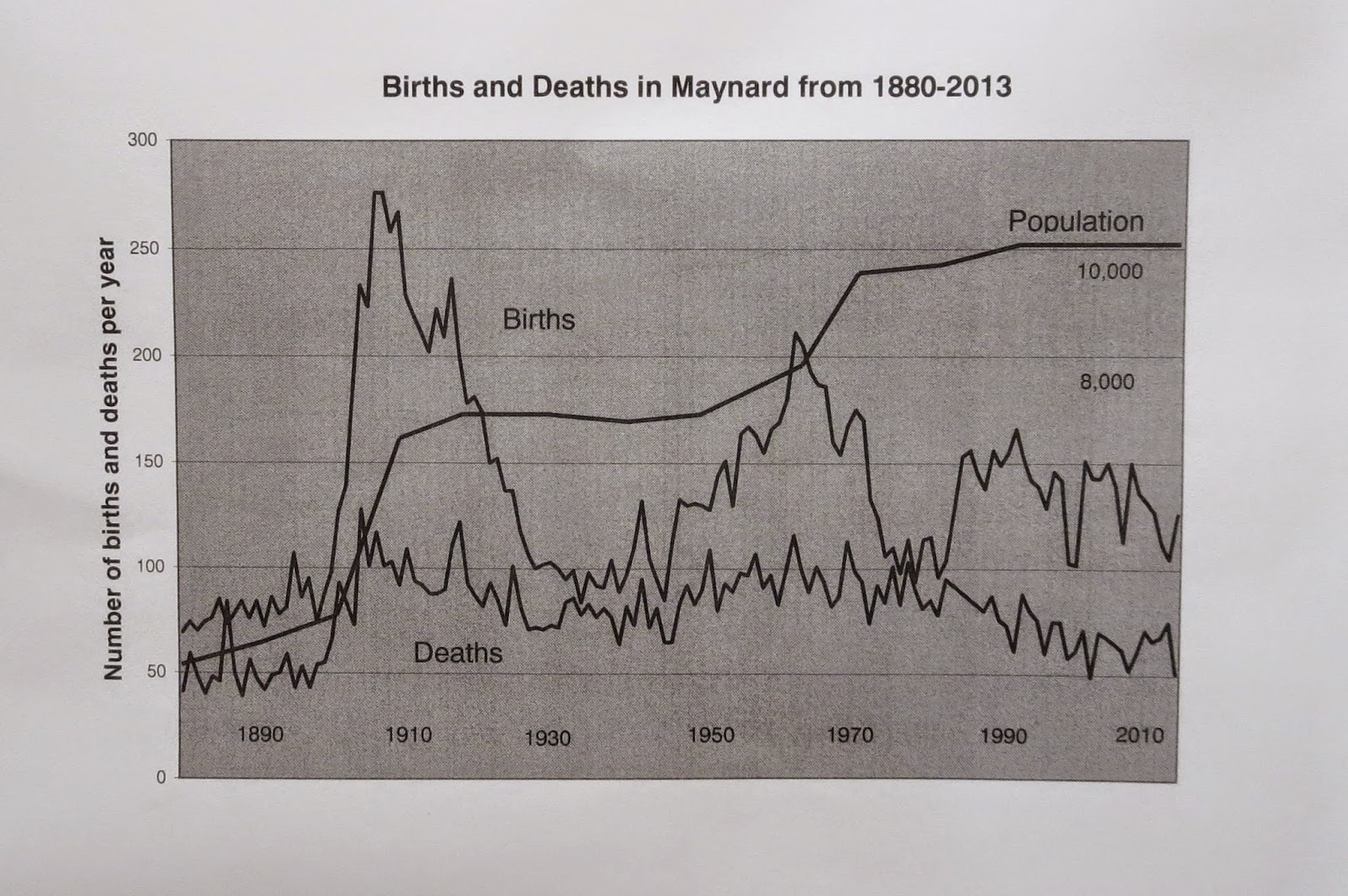 At first glance, deaths look to be fairly constant at 50-100 per year, but in light of the fact that the population was increasing from 2,200 to 10,100 what the chart really shows is far, far fewer deaths per thousand over time. Not a surprise - cleaner water, safer food, modern medicine and a huge decline in tobacco use has dropped the death rate in the to under 8/1,000/year. Maynard's death rate now falls below the national average, suggesting either that the current population skews younger and/or healthier than the national average Or that older people are moving away to die elsewhere.

A sharp spike in deaths in 1918 was due to the influenza pandemic. Town records show that 35 deaths in the last quarter of 1918 alone were caused by the flu.

Much like deaths, births per thousand population have also decreased dramatically over time. One hundred years ago the national birth rate was on the order of 30/1,000/year, declining to the present day 14/1,000/year. As in many cultures, the desire to have many children decreased as the likelihood of infant and childhood death decreased, while at the same time the cost of raising a child to independent adulthood increased.

Births show three large, sustained peaks. The first two coincide with increases in population. By 1902 the moribund woolen mill (bankrupt in 1898) had been bought by the American Woolen Company, reopened, and started on a major expansion program. Young workers were being hired—mostly immigrant Finns, Poles, Italians and Russians - and the birthrate exploded accordingly. No surprise—there was an uptick in marriages which overlapped the first birth peak. From 1895-1902 the marriages average was 42/year, while from 1903-1917 the average was 100/year.

The second peak in births represents the post-WWII baby boom, and also the transition of Maynard from a factory town to a bedroom suburb for employees of new businesses on Route 128. New houses were being built, especially on the northwest side of town, and population was showing another growth spurt.

One mystery is why the birth rate dropped so dramatically after the 1960 peak. Looking back, this is the period when birth control pills became widely accepted, when birth control sales to unmarried women became legal (1972) and when abortion became legal (1973). Demographics also played a role. Locally, population growth had stalled, new housing had stalled, and what was left was a mature, post-child-birth population aging in place.

The third uptick in births, starting in 1983, is also a mystery. This birth boom was taking place against an unchanging total population and an absence of new home construction. There is a possibility that retired mill workers were either dying or moving away and being replaced by younger employees of Digital Equipment Corporation, as the 1980s were a fast-growth period for Digital.

Statewide, the current birth rate is about eleven births per thousand population per year. Maynard is averaging above that. One possible answer: Maynard's home-owning costs are 30 to 50 percent less than in the neighboring towns of , , and , so Maynard may be more attractive to young couples who are becoming first time home owners. Subjectively, this is borne out by all the strollers being pushed about the downtown sidewalks on good-weather weekends.
Posted by David Mark at 6:44 PM