How Old are Maynard's Mill Buildings?

The existing mill buildings date from 1859-1918. Older, wood-frame buildings were either replaced or destroyed in a 1920 fire. A walk/bike tour can help visualize the evolution of the mill complex - older buildings in the center surrounded by newer buildings on all sides - first under the Maynard family (1846-1898) and then as part of the American Woolen Company (1899-1950). Digital Equipment Corporation started as a tenant in 1957, in time owned everything, but did not add or remove major buildings. (2000-2015) added the parking garage in 2001. Saracen Properties LLC, the new owners/operators, intend to remove two of the smaller buildings both dating to 1887 (#10 and the west end of #2) to create more open space.

Viewed from the parking lot next to , three large buildings face the pond. Building #1, with Powell Flutes sign on the end, was built in 1911 as Building #21. The larger building to its right was completed in 1918 and initially designated Building #1, is now #3. Its construction required draining the pond. There are photos of people walking on the pond’s bottom. Building #5, on the far side of the pond, and the largest at 640 feet long, was completed in 1902.

Walking under the parking garage traces the path of the railroad tracks that delivered coal for the steam engines. Continue forward here, keeping in mind that there was nothing but mill pond to the right of the tracks. The buildings on the left, now bannered as #2 at the near end and #4 at the far end were originally #'s 2-7 and among the oldest still standing (parts back to 1859). These were where the pre-steam waterwheels were sited. Outflow, on the river side, was through what is now a red-painted gate. Situated between the waterwheels and river were a number of low-storied brick buildings in which water was pumped out of the millrace for purposes of washing raw wool and the dyeing process. Discharges discolored and polluted the river.

At the end of Building #3, on the right, is the old pond control apparatus. From here, water was released to the river whenever the pond level got too high. Prior to the installation of steam engines this channel powered a saw mill. Afterwards, it provided water for the engines, as roughly six tons of water were needed for every ton of coal. Spent steam and coal ash were vented from the top of two 200 foot tall chimneys, of which one remains, obsolete.

Our walk continues toward . Building #4 (left) went up in 1871. The powerhouse building, unwindowed, dates to 1900. Current maps show it as #9. After a left turn onto the sidewalk along the river, pass Building #6, completed in 1901. It’s possible, but in need of researching that this is when the river was narrowed and walled from to the .

The next building on this tour was originally #11 (1893) but now designated Building #8. Behind it is the old #8 (1870). Between the two is the clock tower, which was erected in 1892 atop the external freight elevator structure for the older building. Continuing left onto , the building currently bannered as #12 was built in 1866 (as Building #1).

Completing the walk along back to the starting point passes two modest brick buildings on the left and two wooden buildings on the right. The first wooden building, on the corner of and , was the residence of Amory Maynard before he built a mansion south of the mill. The next over belonged to Lorenzo Maynard, his oldest son. The brick building at 146 , medical offices on the first floor and current home of the Historical Society on the second, was built in 1903. The last building before reentering the parking lot was built in 1905. These two buildings housed mill offices.

While on this tour, look for architectural details, particularly the varying styles of brick arches over the tops of windows and decorative brickwork at the rooflines. Most of the buildings were well windowed to provide natural light for the workers, but from the very beginnings the mill also has gas lighting. 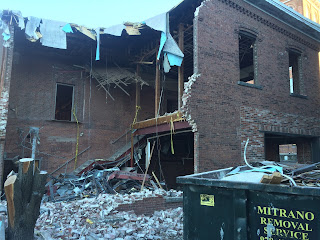 When buildings are torn down some of the construction details come to light. Photographed is the west end of Building 2, built in 1887. Individual bricks did not have lettering, so these post-dated the era when brick-mix was pressed into a mold by hand (the mold having lettering across the inner surface to leave a brand mark on the brick face). Nails in the floors and roof were rectangular in cross section versus round - a shape that became obsolete circa 1900.

The exterior walls were three bricks thick. The inner and outer bricks were aligned parallel to the wall, with the exception that every eighth row, every brick was end out, so that the other end extended into the center of the wall. With both sides of a wall having this pattern, the inner and outer face surfaces were linked to the center, making the entire wall rigid.

*An April 2016 column about the demolition of 2A and 10 pointed out that the buildings probably pre-dated 1887. Both were in an image of the mill celebrating the 40th anniversary, 1886. An earlier image - the 1879 aerial map - showed Building 2A but not Building 10.

Fifty of David Mark’s 2012-2014 columns were published in book "Hidden History of Maynard" available at The Paper Store, on-line, and as an e-book.
Posted by David Mark at 6:14 AM