For nearly one-third of its existence as an institution, Maynard's U.S. Post Office has resided in its current building at . At a recent visit the people in line in front of me were: 1) stopping home delivery for a vacation, 2) dropping off wedding invitations, 3) getting a passport photo taken, and 4) shipping a large box to a person in . I was there for stamps.

Two sets of stamps are issued each year for the winter holidays season, usually one with a religious theme and one winterish. This year the choices are Geometric Snowflakes and A Charlie Brown Christmas. Both available now.

There are some interesting stamps that fall outside the first class postage rate. Wedding invitations, what with RSVP envelopes inside, tend to be too heavy for the standard rate, so the post office creates Two Ounce stamps for this special need. And for those who want to think outside the government stamps, USPS recommends Zazzle (http://www.zazzle.com/stamps), a non-government entity that has hundreds of love/wedding themed postage stamps, and can also create a custom stamp from a photo of the engaged couple. Zazzle also does divorce themed stamps. (Example: silver lettered "I Do Not" on a black background.) 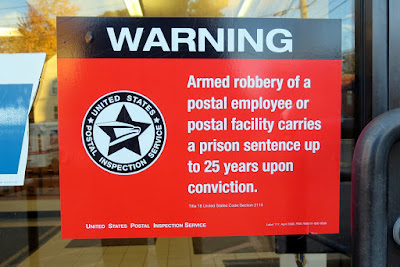 Prior to finding its long-term home on the Post Office was somewhat peripatetic. The first location, circa 1850, shortly after the woolen mill opened, was next to the railroad station. Amory Maynard served as first Postmaster. Subsequent sites included inside the Riverside Block building (long before it became Gruber Bros. Furniture), the corner of the building currently occupied by Boston Bean House, another site on Main Street, then up at the corner of Nason and Summer Streets before settling in its current Main Street location. Just inside the door is a plaque: This building dedicated to public service 1963, John F. Kennedy, President of the , J. Edward Day, Postmaster General.

Historical descriptions tell of immigrants arriving from and other European countries with Post Office box number of their Maynard relatives written on a tag attached to their clothing. Supposedly, the workers 'delivered' the arrivers to their families. The truth may not have been as dramatic. Immigrants at Ellis Island, in New York's harbor, was required to display a "Landing Card" on their outer clothing with information including their name, name of ship and that they had passed daily health inspections, but not their destination address.

Once cleared to leave the island there were immigrant aid societies which would help get tickets for the right trains, and also provide a card to facilitate travel: "To the conductor: This person is going to this address. Please show bearer where to change trains and where to get off, as this person does not speak English." The train station was the gateway to arriving in Maynard, not the Post Office.

Little-known fact: Only immigrants in steerage, i.e., third class, went through . Those who had enough money to travel first or second class were subjected to a cursory medical examination while still on board, then dropped off at .

Upgrades of post office services reached Maynard in an odd order. Rural free delivery was implemented nationally and locally in 1902. Long before then, most cities already had in-town delivery direct to homes (Boston started in 1864), but Maynard did not start home delivery until 1920. Until then, people picked up their mail at the post office. Nationally, home delivery was twice a day until the Federal Post Office scaled down to once a day in 1950.

Today, the Maynard Post Office serves a population of about 10,100 people. According to Postmaster Mike Welch, employees number 18, 6 at the building and 12 carriers for home delivery. All are federal employees. The building itself is privately owned by Mass Postal Holdings LLC. The Post Office pays rent. This is not unusual - nationally, the Postal Service owns only ten percent of its buildings.

In addition to the mail boxes at the Post Office there are nine mail boxes scattered about town, the majority found at senior housing centers and condominium complexes. Neighboring , serving a population of 7,100, has a post office next to the Shaw's shopping plaza and only two mail boxes elsewhere in town.
Posted by David Mark at 10:48 AM