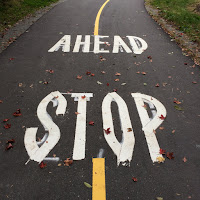 With the completion of the Assabet River Rail Trail in Maynard and Acton, many people are discovering the joys of not sharing their exercise space with cars and trucks. The downside is that trails - which exclude motor vehicles – still have their own safety concerns. The danger points are two: where the trail crosses roads, and interactions among people using the trail.

Manyard, and also Hudson, differ from Acton and Marlborough – the other two places where the Assabet River Rail Trail exists – because of the many street crossings. In Acton, the 1.25 miles of trail crosses no streets. In Maynard, the 2.25 miles of trail crosses nine streets. Approaching these intersections on the trail there are large, white words “STOP AHEAD” painted on the trial itself and trail-size red-and-white STOP signs. These accomplish nothing if people on the trail do not actually stop. Often, bicyclists and runners approach the intersections, look as best they can in the direction of oncoming vehicle traffic, and then proceed without having come to a complete stop. This is especially dangerous at the Route 27 and Acton Street intersection, as the vehicles heading south on Route 27 barely slow down to make the right turn onto Acton Street. Bushes and small trees have been cleared about 40 yards back from the intersection to provide improved sight lines for trail users and drivers. Trail users are advised to come to a full stop and activate the strobe light system, which exists at this and four other locations in Maynard.

The Assabet River Rail Trail, like many other rail trails, has posted Guidelines for Sharing the Path. Key point for all users: “KEEP TO THE RIGHT except to pass.” Key points for pedestrians: don’t walk more than two abreast, look before changing direction, and keep you dog on a leash (maximum 6 feet). Key points for bicyclists: bicyclists must yield to pedestrians, pass on the left and only when safe, maximum speed 15 MPH and give an audible warning before passing. The same guidelines should apply to any wheeled means of transportation, be it rollerblades, skateboards or scooters. Guideline signs are posted at the Acton end and Ice House Landing, in Maynard.

Trail users should understand that the most common type of accident is when pedestrians are approached from behind by people on faster moving wheeled vehicles, mostly meaning bicycles. The pedestrians – or their children, or their dogs – may veer from walking a straight line at the same time as being passed. The riders’ contribution to these accidents is not warning those about to be passed, either by ringing a bell or by loudly saying “On your left.” Even an audible may not suffice if the pedestrian is listening to music via earbuds. Or is a child. Or is a dog.

From one website: “Preventing these collisions can be a headache for authorities. In general, many bicycle/pedestrian accidents take place at crossings, junctions or on pavement - spots on the road or trail where things get congested. These situations can be tricky. If you are a pedestrian walking lawfully on the sidewalk and a bicyclist hit you due to their reckless nature, you can file a claim for your injuries. On the other hand, if a pedestrian is distracted and causes a law-abiding bicyclist to crash, the bicyclist could file a claim against the pedestrian.”

Usage of recreational trails by people on electric motor assist bicycles and scooters is a special case regulated by state law. While some states allow e-bikes on protected trails, Massachusetts presently does not. The exact wording of the law “…but shall be excluded from off-street recreational bicycle paths.” Even when being operated on roads, e-bike and e-scooter operators must have a Massachusetts driver’s license or learner’s permit, wear a helmet, and not exceed speeds over 25 mph.
MA electric bike law: https://peopleforbikes.org/wp-content/uploads/2017/10/E-Bike-Law-Handouts_MA_compressedv2.pdf