The yellow, wood-frame building at 42 Summer Street, Maynard, is on the verge of being torn down to be replaced by an apartment building. The existing building is not historic enough to justify any attempt to preserve the exterior while repurposing the interior. In general, “not historic enough” can be applied to much of Maynard’s private residences due to those buildings not being particularly old (by New England standards), never lived in by someone famous, nor designed by a famous architect. The Town of Maynard has established a Demolition Delay Bylaw, at the instigation of the Maynard Historical Commission, to slow or stop demolitions of significant buildings.

Maps from 1875 and 1889 show the Summer Street property with no house on it, owned by Mrs. T. Brooks. Adjacent property shown as owned by T. Brooks. The same map shows L. Brooks and S.P. Brooks owning land across Summer Street, including a cider mill. Those people were Rebecca Brooks, wife of Thomas Brooks, Luke, their son, and Silas, brother of Thomas. The Brooks clan were early settlers and extensive land owners on the north side of what would become Maynard.

The building itself dates to only 1948. The property may have been unattractive to earlier development because it was adjacent to the coal yard and fuel oil tanks owned by the United Co-operative Society. Warren A. Twombly purchased the property for a relocation of the W.A. Twombly Funeral Home, which had been on Main Street, near the Methodist Church. Twombly’s was one of four funeral homes in Maynard, and was in business into the late 1960s. From records in the collection of the Maynard Historical Society, it is apparent that Twombly’s handled many of the burials of people of Finnish descent – at one time a very significant portion of Maynard’s population. 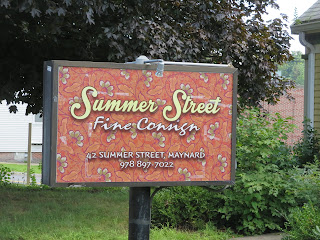 The next occupant of the house was Century 21 Classic Properties, a real estate business owned and operated by Paul Boothroyd. This business was replaced by Call-A-Copy Inc (later renamed CAC Digital Copy & Print Center). Over time, the copying and printing business shrank, to be gradually replaced by Summer Street Fine Consignment, under the same management. The property was purchased in 2018 by James MacDonald, a developer/operator of several apartment buildings scattered about Maynard. The consignment business wound down operations in 2019 as preparations for the demolition took shape.

The building, scheduled to be demolished soon, sits on a bit more than half an acre of land that slopes from 190 feet elevation above sea level on the north (street) side to 175 feet on the south side. The shape is odd. To fit in a 24-unit apartment building, the narrow end of the rectangle will face Summer Street, but at an angle. The driveway, on the west side, will run the length of the property, to enter underground parking from the south end. The three-story building will have siding and a peaked roof rather than be brick with a flat roof. The smallest units will be studio apartments of 500 square feet, the largest, duplexes with two bedrooms.

The Maynard Historical Commission has identified a “List of Historically Significant Properties in Maynard” that encompasses about 60 buildings. The Demolition Delay Bylaw (2017) provides for up to a 12-month delay of the demolition of buildings or the exterior façades of buildings deemed historic. (Interior demolition and subsequent construction not affected.)

Some buildings, while parts are old, have been modified so extensively as to be not historic enough, an example being the Gruber Bros. Furniture building at 117 Main Street. The original building dated to 1868, built by Amory Maynard, called the Riverside Block. It hosted the first town meeting, April 1871. A severe fire in 1934 destroyed the second and third floors; what remained went through several remodelings during the Gruber family tenure. This building is fated to be demolished and replaced by an apartment building with commercial businesses on the first floor.