ONLY IN MAYNARD Coffee Mugs

Nearly 20 years ago it was possible to buy ONLY IN MAYNARD bumper stickers, T-shirts and sweatshirts at local stores and at Maynard Fest. The lettering was orange against a black background - Maynard's school colors. Then, for a while, the sole remnant of this endeavor was bumper stickers for sale at Russell's convenience store, next to Town Hall.

The bumper stickers had TM superscripted above the end of ONLY IN MAYNARD, signifying that an application had been filed for a trademark in 2003. This was a Massachusetts-only trademark. It lapsed, but a new Massachusetts trademark was issued in 2017 to a new holder. As of 2020 there are ONLY IN MAYNARD bumper stickers and T-shirts, offered for sale at various venues and events, with profits channeled to non-profit organizations located in Maynard. In addition, an agreement was reached with the trademark holder that the slogan could be affixed to coffee mugs. The mugs, black exterior, orange interior, the slogan in orange on the outside, are for sale at The Outdoor Store, Serendipity, Boston Bean House, Sugar Snap and other locations. All profits are channeled to an effort to beautify the Assabet River Rail Trail with flowering spring bulbs, summer-blooming perennials and flowering shrubs and trees. This “Trail of Flowers” effort, initiated in 2018, has resulted in the planting of thousands of daffodils, plus hundreds of tulips, daylilies, irises and other plants in Maynard and Acton, with plans to extend the plantings to the south section of trail in Hudson and Marlborough. See www.trailofflowers.com for program description and photos.

A bit of history: In the original form and subsequent incarnations, the words on ONLY IN MAYNARD products were deliberately printed so that the right side was noticeably higher than the left. Best guess is the wording was askew to convey that negative, rueful pride that only in Maynard could things (town things, school things, people things...) be so humorously incompetent or fouled up.

To counter the prevailing negative impression, a group of civic-minded citizens approached the Beacon-Villager newspaper back in 2005, to see if they could take turns writing a pro-Maynard column featuring the friendly and welcoming nature of this unique small town. The column lasted only a few months. An echo of that positive intent was conveyed in a 2008 article in the Beacon-Villager that read in part "A clever slogan, coined some few years ago, continues to describe our singular uniqueness, our melting pot citizenry and our basic values for the 'good life.' That slogan, ‘Only in Maynard,’ sets up the town as a special place where very special people do distinctive and exceptional things. This is especially true in the art of song and music as developed in our town." 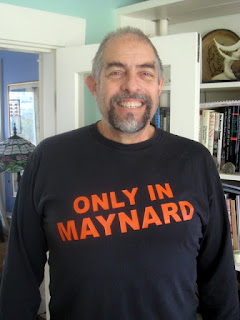 So, after all this debate, what does "Only in Maynard" really mean today? Whether it is only in this small town are people so warm, friendly and welcoming, or only here are things so ruefully, headshakingly messed up, or a comment on the unique nature of life in Maynard, my own opinion is that in comparison, ONLY IN ACTON or ONLY IN SUDBURY or ONLY IN STOW would make no sense whatsoever.

A version of this was published in 2013, and again in February 2020 just before the COVID-19 pandemic closed the venues that were selling the coffee mugs. All profits to planting flowers along the rail trail.