Before Europeans Arrived... and After

On March 25, at 7:00 p.m., the Maynard Public Library will present a Zoomed talk titled: “Before the Europeans Arrived… and After.” Registration (required) at https://www.maynardpubliclibrary.org/may150. This is the second in a monthly series of history lectures produced by the Sesquicentennial Steering Committee as part of Maynard’s celebration of the 150th anniversary of its creation on April 19, 1871. The April talk will be “How Maynard Became Maynard.” A new history book “MAYNARD MASSACHUSETTS: A Brief History” is for sale for $21.99 at 6 Bridges Gallery, 63 Nason Street, THUR-SAT, 12-5. 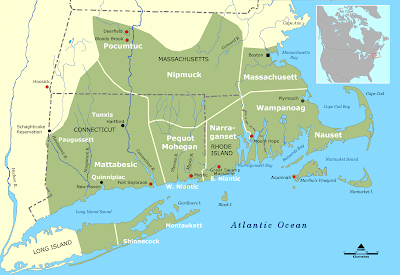 Prior to the arrival of the Europeans, the native inhabitants of what is now central Massachusetts, from around Concord to west to Springfield, plus a northern portion of both Connecticut and Rhode Island, were the ‘Nipmuc’ estimated at 8,000 people. Nipmuc has many alternative spellings, such as Nipmug, Neetmock and Nipnet, all generally accepted as translating to “fresh water people.” The Nipmuc had trade alliances with neighboring groups: Pequot to the south, Wampanoag to the southeast, Masachuset to the east, Pennacook to the north and Pocumtuc to the west. All of these groups spoke dialects of the Algonquin language. The Nipmuc grew corn and other crops, hunted deer, and in the spring enjoyed the bounty of herring, alewives and shad swimming upriver to spawn. Berries and nuts were gathered in their seasons.

There is scant evidence of residency in what is now Maynard. The land was hilly, and not well suited for agriculture. The Assabet River was fast-moving in the spring, then very shallow in the summer and fall, and so less conducive to year-round fishing compared to the Sudbury and Concord Rivers. 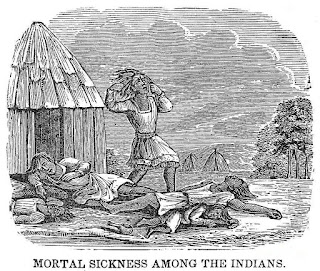 Wherever Europeans arrived in what became New England, within a generation entire cultures and populations were wiped out. The initial causes have historically been attributed to a litany of diseases including smallpox, plague, yellow fever, measles, influenza, scarlet fever… Leptospira, a bacterium, has been tentatively identified as the cause of the first, worst epidemic of 1616-19. Infection and death swept through villages so quickly that the living did not have time to bury the dead. The natives referred to the event as “The Great Dying.” English settlers described finding empty villages with bones scattered on the ground. There were epidemics from other diseases in 1631-33, 1645, 1650-52 and 1670. King James I is quoted as saying “There hath, by God’s visitation, reigned a wonderful plague, the utter destruction, devastation, and depopulation of that whole territory…” Pre-contact with Europeans, the eastern Algonquin region that extended from Delaware to Maine numbered 100,000 to 150,000 people. One hundred years later it was one-twentieth that.

As a result, the Puritans who made up the “Great Migration” from England, 1620-1640, found this to be ‘empty’ land that had until recent years been partially cleared and farmed. This was easily returned to productive farmland – a process of combining the native crops of corn, beans and squash, with European wheat and an assortment of edible domesticated animals (cattle, hogs, sheep, goats and chickens). With crops suitable for winter storage plus domesticated animals to eat, the colonists did not have to rely so heavily on hunting, nor practice the semi-nomadic lifestyle of the natives. Instead, they owned and farmed in place.

Transfer of land from natives to English settlers was a combination of sale, forced sale, encroachment and outright taking. From the colonial side, the Governor and General Court of the Colony of Massachusetts would grant a group a right to settle an area of land. The grantees were obliged to pursue obtaining a deed of sale from Native Americans and occupy the land. In 1635, Concord was approved, with an area of 36 square miles. The purchase was competed in 1637. The widow of Sachem Nanapashement, Tahattawan, Wibbacowett and others accepted payment from Simon Willard, John Jones and others. Payment included 'wampum', steel tools and clothing. Many years later, two Native Americans – Peter Jethro and Jehojakin – having witnessed the sale, provided testimony that it had been a fair bargain.

In 1638, Sudbury was granted a right to create a town of 25 square miles. The deed of purchase was registered in 1648. A subsequent expansion to the west in 1649 was referred to as “the two-mile grant.” This reached to the Assabet River, thus including land that in 1871 became the south side of Maynard. While granted and divided into 130 acre lots, much of this was not occupied at that time.

A forced transfer of land of what became Maynard was between Tantamous, also called “Old Jethro” (father of Peter Jethro), who lived at Nobscot, now the Framingham/Sudbury border. In 1651, Tantamous was forced to surrender claim to 1,000 acres west of the Sudbury grant to Hermon Garrett, of Concord, in a court dispute over payment for the purchase of two horses. Separately, a Pompositticut Plantation, west of Concord – later to become Stow – was surveyed circa 1660 (described as “meane land”) and granted, but as not permanently settled at that time, the grant later rescinded.

All this granting and purchasing crashed to an end with King Philip’s War of 1675-76. Metacom, also known as Metacomet, and by the English name Philip, was a Wampanoag chief. Attempts to maintain a truce between the Wampanoag and the English colonists were frayed by colonial expansion and scattered acts of violence on both sides. In the summer of 1675, the actions of the native Americans coalesced into concerted attacks on towns across the Plymouth, Massachusetts Bay, Rhode Island, New Haven and Connecticut colonies. Locally, history has it that Metacom’s supporters met atop Pompositticut Hill – now Summer Hill – to decide whether to attack Concord or Sudbury (the answer: Sudbury).

Although the colonial militias were supplemented by volunteers from the Praying Villages – places occupied by Native Americans who had converted to Christianity – there was suspicion that Nipmuc were also collaborating with King Philip. This was in part true. Nipmuc understood the threat of colonial expansion. Additionally, Metacom’s Wampanoag warriors were residing in Nipmuc territory much of the summer and fall of 1675. To remove this perceived threat, natives were restricted by the colonists to five of the Praying Villages, and then in October 1675, hundreds were relocated to Deer Island, in Boston Harbor. Winter weather combined with inadequate housing and shortage of food led to more than half dying there. Tantamous and his family either escaped from Deer Island or had avoided being sent there. Although more along the way of being a noncombatant refugee, Tantamous was captured in New Hampshire, marched through Boston with a noose on his neck and hanged in the Boston Common. His family, other than Peter Jethro, were sold into slavery. 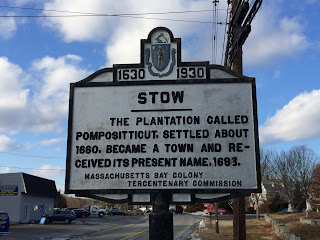 Many of the Nipmuc who survived the war moved north or west, or assimilated into other tribes. In May 1683, the General Court approval of a town name “Stow.” A year later, deeds to this land and the Two-Mile Grant for northwest Sudbury were signed by a dozen or so Native Americans who were among a post-war remnant population. This completed the taking of the land that later became Maynard.

Land taking continued elsewhere. The Hassanamesit Reservation had contained 7,500 acres in 1728 when the Commonwealth of Massachusetts purchased most of the land. The money from the sale was to be held for the Nipmuc in an account at a Boston bank, but it was embezzled by a state official. Today, the Commonwealth of Massachusetts recognizes the present-day Nipmuc as constituting people a group of some 500 members living in and around the City of Worcester, Chaubunagungamaug Reservation (in Thompson, CN) and Hassanamisco Reservation (in Grafton, MA). The reservations are small plots of land used by Nipmuc and other Native Americans for gatherings and celebrations. 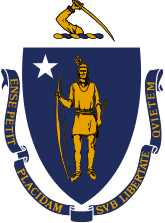 Not in the newspaper column: On Monday, January 11, 2021, Gov. Charlie Baker on Monday, January 11th, 2021 signed bill number S.2848, calling for the creation of a special commission to study and recommend a new or revised state seal and motto. The commission must complete its work by October 1st of this year, and recommend changes to the seal and motto that will “faithfully reflect and embody the historic and contemporary commitments of the Commonwealth to peace, justice, liberty and equality and to spreading the opportunities and advantages of education.”
Sword-over-Indian was on various versions of the state seal starting in 1780. The current state seal, which was adopted in 1898, and is present on the state flag, and at every town border as part of the sign showing the name of the town. The seal is considered to be deeply offensive to Native Americans. Advocates for change claim that Massachusetts is "the last U.S. state whose flag includes representations of white supremacy" given that Mississippi replaced its Confederate emblem state flag in January 2021.
The sword was modeled on Myles Standish’s; known for killing Native Americans. The bow was modeled on a bow taken from a Native American killed in 1665 in Sudbury. The belt was modeled on one belonging to Metacomet (King Philip), killed 1676 in King Philip’s War. The downward pointed arrow held in the left hand signifies a ‘pacified’ Native American. Lastly, the body proportions were taken from a Native American dug up from a grave in Winthrup.
This website has a separate entry listing Native American websites and literature used to research this article.
Posted by David Mark at 7:55 AM