Maynard's Schools Through the Centuries

Surprisingly, the two oldest school buildings – predating the creation of Maynard – are still with us. In the spelling of the era, the goals were to "teach children to rede and wright and cast accounts". Sudbury appears to have voted in 1779 to build a one-room schoolhouse for the northwest district, in 1871 moving that building farther north to what is now the intersection of Routes 27 and 117, where it served as Maynard’s “Turnpike School” until 1881. No longer a school, moved again in 1884 to corner of Concord and Acton streets – a distance of one mile – where it abides as a private home. On the Stow side of the Assabet River, District No. 5 had a school constructed in 1766: the “Brick School.” This was on Summer Street, hence became a Maynard school in 1871. It was closed the following year. It remains in place as part of the home at 101 Summer Street. Two other schools also pre-dated Maynard. One two-room building at the site of present-day Town Hall served until the town decided to replace it with its first multi-room brick school at the same site. The other, the first school on Nason Street, was lower grades, then first high school, then lower grades again.

At the time of the incorporation of Maynard in 1871, the new town was served by ten teachers working in four small school buildings. Salaries were in the range of $9-15/week. The high school was a two-room wooden building on Nason Street. Enrollment was 35 students. Six years later the high school classes relocated to a new two-room school on Acton Street, across from the east end of Main Street, leaving the Nason building to revert to elementary school.

The year 1892 saw a consolidation of Main, Nason, Acton and Sudbury schools into a two-story, twelve-room, wooden building at the Nason Street site, on the same stone foundation that is now the first floor of the Maynard Public Library. For a time, this was Maynard’s only school building, serving all grades.

he mill went bankrupt in 1898, then purchased and reopened in 1899 by the American Woolen Company. Expansion added the very large Building No. 5 on the south side of the millpond in 1902. The workforce grew, as did the town’s population: from 3,142 in 1900 to 6,390 in 1910. The population explosion of school-age children, especially in the Presidential Village housing development of 1901-03, led to the construction of new, brick-constructed schools at the Main Street site (1903) and on Bancroft Street (1906). The first was renamed Woodrow Wilson School in 1932. The second had a second floor of four more classrooms added in 1910 and was renamed Calvin Coolidge School in 1932.

September 20, 1916, a nighttime fire brought an end to the Nason Street School. This was attributed to arson, as there had been a less damaging fire at the school just a week earlier. All that was left standing were the two brick chimneys. For a disaster, the timing was good. Three years earlier the town had voted to build a new high school, the site later chosen on Summer Street. The two-story brick building – currently the east wing of ArtSpace, was built at a cost of $61,500 and occupied October 2, 1916. This was the high school through 1964. A new, brick, elementary school was constructed at Nason Street, atop the foundation of the fire site. It opened fall of 1918, named Roosevelt School 1919. It served as a school through 1988, stood empty almost 20 years, resurrected as the Maynard Public Library, July 2006.

Meanwhile, back on Summer Street, the Town of Maynard, in its wisdom, decide to redirect a stream that flowed next to the high school into an underground storm sewer and build a junior high school, auditorium and gymnasium atop it (probably contributes to why ArtSpace is flood prone). The junior high opened January 1926, named Emerson Junior High School in 1932. After the high school moved to its new south-side campus in 1964, half the building became Fowler Elementary School and the whole complex became known as Emerson-Fowler School. In time, the junior high school took over the entire building as Fowler Middle School, remaining as such until the end of 2000.

Back on Main Street, Wilson School was closed in 1942 because the school population had decreased dramatically, reopened in 1948 when the post-war baby boom started to arrive, and then was destroyed when a pre-dawn fire on December 17, 1952 left only the scorched brick exterior standing. This left Coolidge and Roosevelt as elementary schools.

The next phase for the Maynard school system was to create three schools adjacent to each other, on the south side of Route 117, each to have adequate parking and adjacent fields for physical education classes. Green Meadow School was first. Land was taken from Crowe Park. The school opened for the 1956-57 school year. Coolidge was kept on until 1981. A major addition to Green Meadow was approved in 1986, completed for the beginning of the 1988-89 year, which led to the closing of Roosevelt in 1988. “Maynard High School” was completed in 1964 at a cost of $1,700,000. Fowler Middle School (leave the old building, keep the name) opened in 2000. And then, in 2013, the fifth Maynard High School was replaced by the sixth Maynard High School, at a cost of $42,500,000. Note that over the years, two schools were completely destroyed by fire (Nason 1916, Wilson 1952) and three were significantly damaged (Nason 1879, Emerson-Fowler 1978, Maynard High School 1992).

Separate from the public school system: Mrs. Smith's School for Girls (1848-1857) was run by Mrs. Susan Smith at the Levi Smith place on Great Road. In 1965, Saint Bridget’s Parish opened Saint Bridget’s Parochial School in a brick building on Percival Street, on a filled-in section of the mill pond. The school was staffed by Sisters of Notre Dame, who had a modest convent near-by. The building is now home to The Imago School, a private school offering a Christian faith-based education for grades pre-kindergarten through eighth grade. 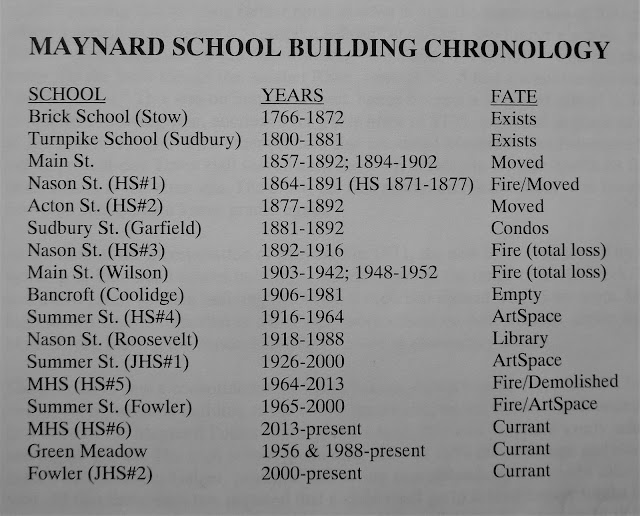