Some seven or eight years ago it was possible to buy ONLY IN MAYNARD bumper stickers, T-shirts and sweatshirts at local stores and at Maynard Fest, the annual street fair. The lettering for ONLY IN MAYNARD products was orange against a black background - Maynard's school colors. The sole remnant of this endeavor is bumper stickers for sale at Russell's convenience store, next to Town Hall. 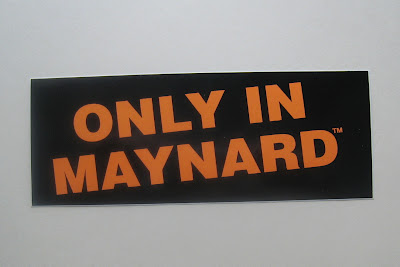 "Only in..." can have different meanings: "Only in Vegas," has one; the Only-in-Portland ethos of the cable TV show Portlandia, another entirely. Only in is a TV show about taking pride in things American, while "Only in " is the motto of www.keepboulderweird.org. Life in includes the Naked Pumpkin Run: flash mobs of people running down streets wearing real or plastic jack-o'-lanterns on their heads - and nothing else except running shoes.

The words on ONLY IN MAYNARD products were deliberately printed so that the right side was noticeably higher than the left. Best guess is the wording was askew to convey that negative, rueful pride that only in Maynard could things (town things, school things, people things...) be so humorously incompetent or fouled up.

A recent example: use of snow blowers on the roof of Memorial Gym during the big-snow winter of 2010-2011 was intended to save the roof from risk of collapse, but instead resulted in roof damage, leading to leaks and severe water damage to the gym floor, which had been completely refurbished only months before. In the end this contributed one more reason for demolition of the gym in 2012.

Back in 2005, to counter the prevailing negative impression, a group of civic-minded citizens approached Jesse Floyd, the then editor of the Beacon-Villager newspaper, to see if they could take turns writing a pro-Maynard column featuring the friendly and welcoming nature of this unique small town. The column lasted less than a year. Only in Maynard.

An echo of that positive intent was conveyed in a 2008 article in the newspaper that read in part "A clever slogan, coined some few years ago, continues to describe our singular uniqueness, our melting pot citizenry and our basic values for the 'good life.' That slogan, Only in Maynard, sets up the town as a special place where very special people do distinctive and exceptional things. This is especially true in the art of song and music as developed in our town."

Harking back to the origin, the bumper stickers have TM superscripted above the end of ONLY IN MAYNARD, signifying that an application had been filed for a trademark. A initial check of the records of the U.S. Patent and Trademark Office found no application was ever filed, the omission apparently qualifying as one more "Only in Maynard" example. However, further search found that a service mark was approved by the in September 2003.

So after all this debate, what does "Only in Maynard" really mean today? Whether it is only in this small town are people so warm, friendly and welcoming, or only here are things so ruefully, headshakingly messed up, or a comment on the
unique nature of life in Maynard, my own opinion is that in comparison, bumper stickers reading ONLY IN ACTON or ONLY IN SUDBURY would make no sense whatsoever.


Want to add your "Only in Maynard" story?  Do it in Comments.
Posted by David Mark at 7:08 AM