The Massachusetts blizzard of Feb 8-9, 2013 was on the powdery side, and hence less water per inch of snow. Boston got a tad under 25 inches of snow (24.9 at Logan Airport) and a melted measure of 1.4 inches. That works out to 0.7 inches of water per foot of snow, or 18 inches of snow melting to one inch. 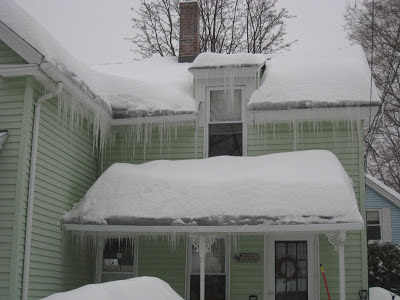 Post storm, many people in New England were removing snow from flatter roofs. The issue is not so much the weight of the freshly fallen snow as it is the subsequent weight added when melt water from a higher roof gets trapped by the snow below. Rain on top of snow has the same effect, as does new snow on top of the old snow.

In our region of Massachusetts a flat or low-slope roof is supposed to be designed to support a snow load of at least 35 pounds per square foot. Freshly fallen snow averages six pounds per cubic foot, but dense, wet snow can be three times that.

Artificially made snow, because it is made from tiny droplets that freeze into round shapes, packs much denser than natural snow, reaching densities of 25-28 pounds per cubic foot.

THE SCIENCE OF COMPRESSION
Sintering describes the process of compression of snow. At one end of the scale this is packing down snow by walking on it - at the other, glacial ice that has formed over thousands of years of compression under the tons of weight of accumulating snow.

To quote one source: "Snowflakes are delicate structures with lots of thin points radiating from a central node. If they are disturbed, the points are broken off and the snowflakes compact together. The energy from this disturbance briefly melts the edges of the squashed flakes, which then freeze together to create a cohesive snow mass. This process, known as sintering, is what happens when you compress snow to make a snowball in your hands."

Or, for that matter, what happened to the dense, quickly solidifying snow of an avalanche once the snow has stopped moving. Not only is the snow three to five times as dense post avalanche, but all the newly sheared surface areas of the snow granules quickly freeze together.

ALL SNOW IS NOT EQUALLY WET
The percentages below are percent of volume, not percent of weight. As water has a higher density than the snow it is in, percent by weight would be higher.

When a snowball is made from moist or wet snow the air is partially squeezed out, but the water does not freeze until the snowball has time in sub-freezing air. Giving it time to freeze would not make it denser, but it would be harder.

THE SCIENCE OF MELTING
Simply put it takes only modest amounts of heat to warm ice up to 0C, but then huge amounts of heat to turn the ice at 0C to water at 0C. Then, once it is water, it takes only modest amounts of heat to warm the water to higher temperatures. Example: a kilogram of ice at one degree Centigrade below freezing will require 2.1 kilojoules (kJ) of energy to warm it one degree - to the freeze/thaw point. It will then take 334 kJ to melt it, although at the end of melting it will still be at 0C. Warming the now liquid water each degree above the freezing point will require only 4.2 kJ. In this example, warming it to just below boiling - to 100C - would require 422 kJ. Look at that! It takes almost as much heat energy to convert ice to water as it does to then heat that same amount of water to the boiling point!

Same in the opposite direction - modest amounts of cooling are needed to drop water to a temperature of 0C, but then huge amounts needed to freeze it. If water is frozen into the shape of a shot glass (see Cool Shooters photo) a beverage can be poured into the 'glass' and it will quickly become ice cold but never freeze.

THE ICICLE TRICK
When icicles form during the day and are actively dripping, the temperature of the ice is very close to 0C.  However, after a very cold night, the icicles will be well below freezing. During the following cold morning it is possible to break off an icicle, dip it briefly in very cold water, and then, by pressing it against a cold surface, have it freeze in place.