History books about Stow or Maynard 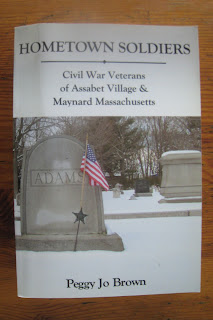 Anyone with curiosity about the history of their home town begins by asking themselves the question "Is there a book?" For both and Maynard, the answer is resoundingly, "Yes."

's count is seven books. Maynard's count is fourteen books, plus four more about Digital Equipment Corporation (Digital/DEC), which was headquartered in Maynard 1957-1998. That combined total of twenty-five books is very impressive for two towns with a combined population of under 17,000 people.

The high count is primarily due to seven paperbacks published by Arcadia Publishing (Images of America and Postcard History series) and three by The History Press, each of which turn out hundreds of local history books every year. All ten of these came out within the past 15 years. AP's format is long on photos and short on words, while THP's is the opposite. In both their business models, any book that sells more than 1,000 copies in the first few years is a rousing success.

Many of the older books were written to coincide with a significant anniversary: 100th for St. Bridget's Church; 50th, 100th and 125th for Maynard; 250th and 300th for . The Maynard Historical Society has in mind a new book to celebrate the town's 150th anniversary, April 2021.

In addition to all these history books (copies at town libraries), both towns boast active historic societies, historical commissions, official websites and Wikipedia entries with history sections. Given all this content, either archived or on line, is there any grist for future historians?

Always. Because history is always happening. Historic buildings are demolished or repurposed. Companies rise and fall. The meteoric rise and subsequent cratering of 38 Studios (née Green Monster Games) may have been too fast to be book-worthy. The Monster Board, later Monster.com, and now Monster Worldwide is clearly a book-worthy story. The company, which helped spell the end of newspaper job ads, was famous for its chimpanzee-starring Superbowl advertisements, but missed the social networking aspect of job search, and thus finds itself with a corporate valuation of less than five percent of LinkedIn.


And then there are two books that go beyond the history of just Maynard or Stow, but worth a mention: