Having just spent the first week of June near Damariscotta Lake, Maine, here are a few nature observations and photographs: 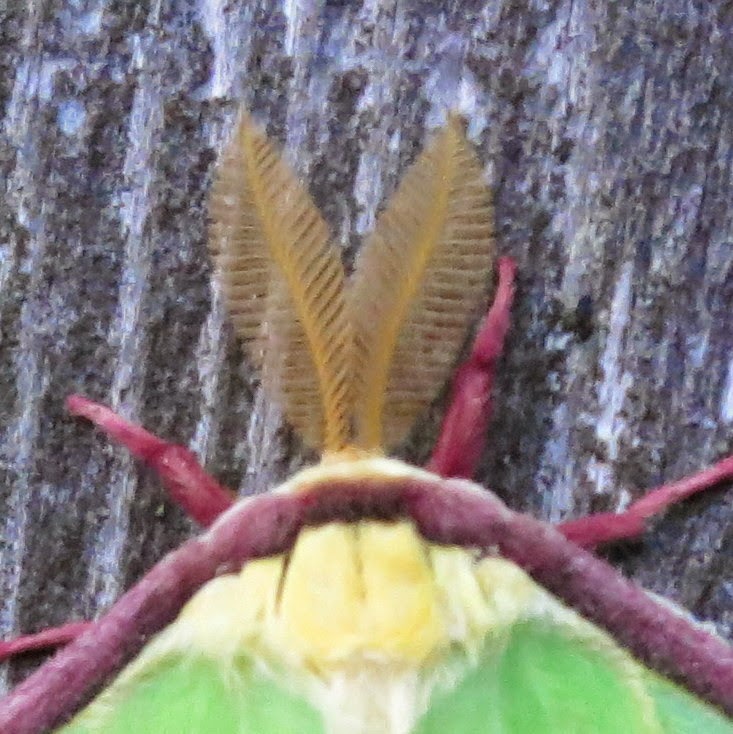 Luna moths: seen either evenings, fluttering or perched near exterior
lights, or days, immobile until night. The rarity of sightings, pale green color and serene flight of these large moths trigger inquires into symbolic meaning and also inspire poetry. This topic has been written about at length in a May 2013 posting of this blog. Briefly, the moths emerge in late May or early June to a 5-10 day lifespan as winged moths. Males seek females by following the trace of pheromones she has released into the night air. He finds her, they mate, she lays 100-300 eggs over a few nights. There is no male display competition. The first male to get to a female is the winner.

Horse chestnuts are of the genus Aesculus, not to be confused with edible chestnuts, which are genus Castenea. Within Aesculus, several species are native to North America, while others were introduced; the one we know as horse chestnut (Aesculus hippocastanum) is from eastern Europe. It can exceed 100 feet in height. In May and June is is covered with large clusters of white/red/yellow flowers. These attract bees and especially bumblebees. On quiet mornings the sound of bumblebees can be clearly heard some ten to twenty yards from the tree. Everything worth knowing about bumblebees is found in the book Bumblebee Economics. A key trick to their ability to compete with honeybees is that bumblebees can shiver flight muscles in order to raise body temperature, allowing them to harvest nectar at early morning air temperatures which bees avoid.

The large brown nuts which fall from spiky pods in the fall are informally known as conkers, and if from an American species common in the mid-west, buckeyes. Unlike American Chestnut, the wood from Horse Chestnut has poor decay resistance. It is also of low density compared to hardwoods, and thus not desirable for building nor as firewood.

The Pink Lady's Slipper (or Lady Slipper)  is indigenous to eastern U.S. and Canada. This is the most common of several species found in Maine. This member of the orchid family is not easy to grow as a potted plant, nor away from it's natural habitat, as it requires partial shade plus the very acidic soil one finds in pine/spruce/hemlock forests. Better to admire it in situ. This is New Hampshire's official state wildflower.

WEATHER: Not easily portrayed by a photo, but weather trends are affecting southeastern Maine which also impact the Damariscotta area. The U.S. National Oceanic and Atmospheric Administration (NOAA) has weather data for Portland, Maine dating back to 1870. Over this period annual precipitation has increased by 18% (from 40 to 47 inches) while average temperature has warmed two degrees and snowfall decreased by 13% (from 75 to 65 inches).

As so much of nature's seasonal timing is temperature driven, there are noticeable shifts. Alewives (an ocean-living, fresh-water spawning fish) move into rivers to spawn when the water temperature exceeds 51 degrees Fahrenheit. The photo shows the top end of the fish ladder at Damariscotta Lake. This is the latest in a string of constructions intended to allow alewives to detour around the mill dams. After breeding, the alewives return to the ocean. A check against old records would probably confirm that alewives now return to the lake weeks earlier than in the past.

Like salmon, the alewife can become a landlocked (100% freshwater) species. Wherever this happens, the freshwater fish breeds to a smaller size - closer to six inches compared to the ocean visitors' 10-12 inch length. These lake-bound fish can succumb to massive die-offs whenever the water warms too much. Lake Michigan's beaches have been the scene of hundreds of tons of rotting fish washing up onto the sand.


KieveWavus is a non-profit corporation that runs a boys' camp and a girls' camp on Damariscotta Lake. Kieve has been in operation since 1926. Traditionally, a bell is sounded to mark mealtimes and other camp schedules. In 2010 Kieve purchased and installed a larger bell next to the dining hall. The design is plain - no adornment except for "BUCKEYE BELL FOUNDRY 1910" along the crown. Dates can signify the origin of the company or the manufacture of the item in question; in this case the latter. Buckeye Bell Foundry was started in Cincinnati in 1837, going through several owners before Ezra W. Vanduzen and his heirs ran it from 1865 until closed circa 1950. [Church bell manufacture in the U.S. ceased in 1939 because metal was needed for the war effort. It is not clear if Buckeye produced bells after the war.] Thousands of Buckeye bells can be found in churches and other installations the world over. This one is 30 inches across at the base, weighs approximately 550 pounds (the mount and mechanism weighing another 500-600 pounds), and the bell sounds a "C." 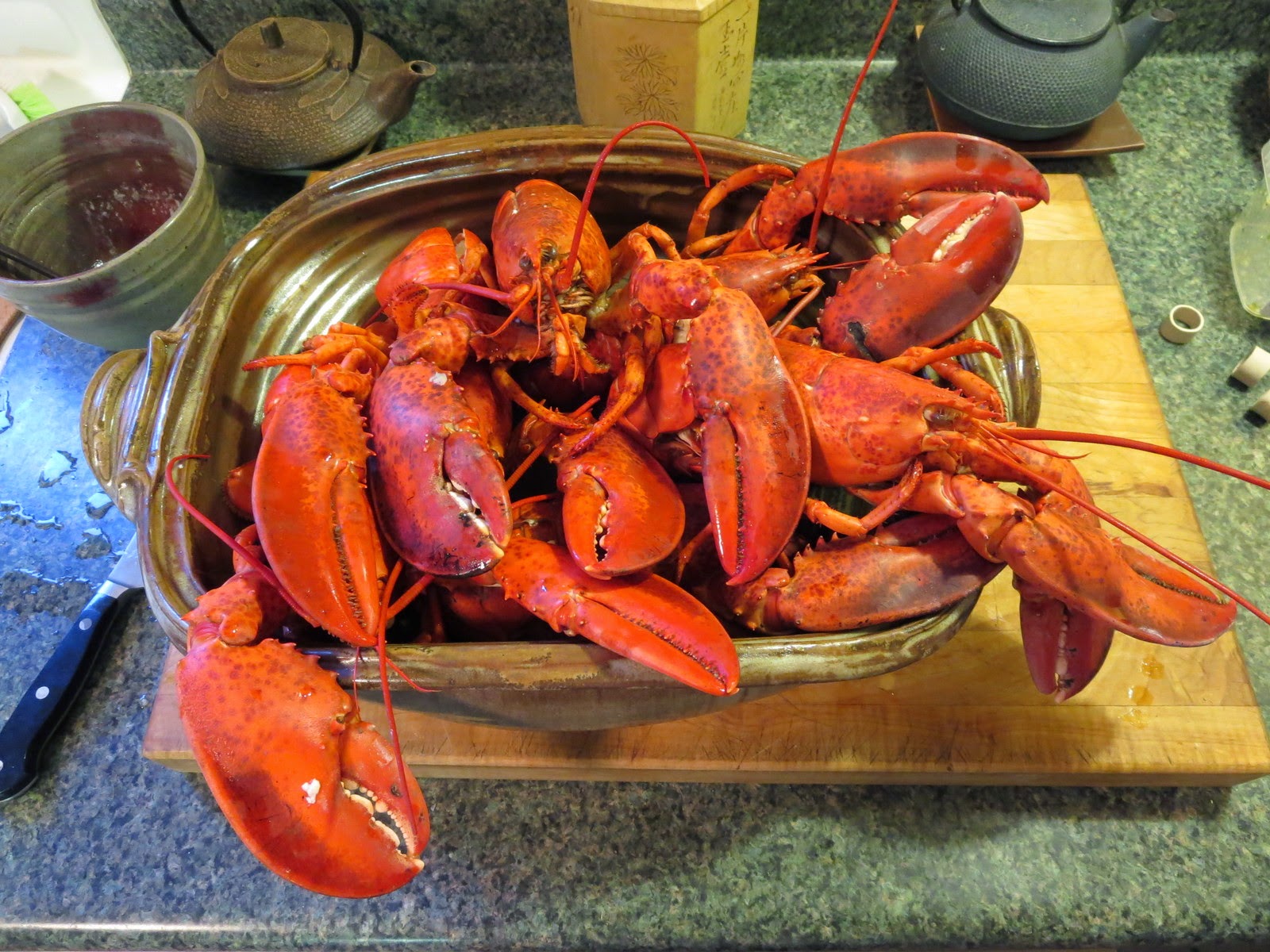 LOBSTER: Obviously, no lobsters are harvested from Damariscotta Lake, but anyone who visits Maine without dining on lobster at least once is a fool. (Or a vegetarian. Or keeping kosher. There are ongoing debates whether lobster is halal or haram.) Maine's catch per year has been topping 100 million pounds the past few years, with an expectation that 2014 will be similar. Thirty years ago the catch was consistently under 40 million. So far, "off-the-boat" prices are a bit higher than the lows of 2012 and 2013. There is a sense that the increased yield is a consequence of warmer water, far fewer lobster-eating fish, plus a tightly regulated harvest practice that returns egg-bearing females, too small, and too large lobsters to the ocean. These practices promote reproduction.

STONE WALLS: Much of southern Maine and neighboring states are woodlands threaded by stone walls. It helps to know that during the Colonial era stone was the last choice of materials for fencing fields. Farming through the 1600’s consisted of laborious clearing of small fields for vegetables, corn and livestock feed. These plots were bordered by cut brush and branches. The fields were stump-filled and worked by hand. As the brush fences rotted they were replaced by fences made of logs laid horizontally so the ends would overlap as the fence zig-zagged along the edge of a field. The goal, always, was to keep livestock out of the fields.

Later still the stumps of trees cut to clear the fields were rotten enough to pull out of the soil and were laid along the edge of a field. As stones emerged through the eroding soil they were added to the fences. Stump fences were functional but not handsome; hence the old-time insult “Ugly as a stump fence.”  When the stumps rotted away, post and rail fences were built over the growing rows of stones.

By the end of the Revolutionary War much of New England was almost denuded of trees. What wood was left was needed for building materials, cooking, and heating buildings. Stone fencing tall and strong enough to contain cattle took a day’s work from two men equipped with an oxcart to gather stone and build 10-20 feet of a fence. Most of what we see crisscrossing New England was a hybrid of wooden post and rail over stone, laid down between 1775 and 1850. Barbed wire, the easier solution, was not perfected until 1874. The stony soil of New England is the result of being worked over by several ice ages.