Start with a Google search on Maynard MA. Select the Maps option. Zoom in a couple of clicks. Drag the map so that it is centered on the west side of town, just north of Summer Street. You will see a designation: "." A switch to satellite view will confirm a grassy airstrip. At this point, say to yourself "Really?!?" Next time you are driving west on Summer Street, remember to glance to the right two houses after passing on the right. Voila! Sid's Airport.

Sidney H. Mason created his backyard airstrip in 1948 (the same year Orville Wright died). Sid was 28 at the time and an Army veteran. He and three friends bought a used Luscombe 1946 8A in 1947 for $1000. Sid bought out his partners soon after. The plane was a two-seater with an all aluminum body and wings, powered by a 65 horsepower engine. The airstrip was carved out of what had been an extensive Mason family farm that dated back to at least 1875. In fact, back in the farm days, the family had two runways, and many of the pilots in Maynard and nearby towns kept their planes there.

Sid was still flying in the left hand (pilot's) seat as late as 1997, age 79. A few years before he gave up flying he had switched over to a 1955 Cessna that needed a bit more runway than his private airstrip provided, so he started using 's Minute Man Air Field. In the meantime, Sid's son - Jack Mason - had taken up his father's hobby while still in his teens, earned his pilot's license, and was flying a Vector Ultralight in and out of the backyard. This meant that their landing strip continued to be an active, FAA-numbered airstrip (MA52). Sid also soloed the ultralight now and then.

By the way, the official definition of an ultralight is a one-seater that weighs less than 254 pounds empty, carries no more than five gallons of fuel, and has a top speed of 63 mph. The limits are crucial, because going over any one of them redefines the object in question as an aircraft requiring registration, and the user, a pilot's license. Under those limits and it is defined as a vehicle that just happens to be airborne, requiring no registration or license.

Run the timeline forward to 2012 and Jack Mason had just became the proud owner of a 1946 Luscombe 8E (a model with a bit more horsepower than his Dad's old plane). He won the plane in a lottery. By choosing a propeller that maximizes take off and climbing power, he has a vintage but modernized plane that can be flown in and out of the landing strip behind his house. Thus, while the plane lives at 's airport, Jack can start a voyage from there, stop home for lunch, then head out again. Or just step out the back door and into an ultralight. 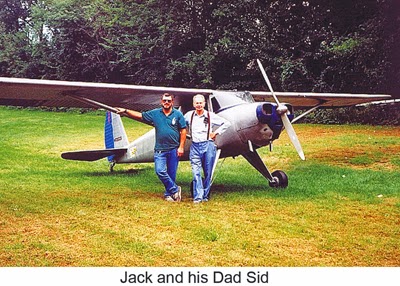 Sid Mason passed on to the big airport in the sky in 2005. His life-long love affair with the air is memorialized by his tombstone, as it portrays his Luscombe in flight, with the plane's registration number N72025 on the side.

One interesting perspective on the history of flight was that early aviators thought it would put an end to war. In Orville Wright's own words, from a 1917 letter: “When my brother and I built and flew the first man-carrying flying machine, we thought we were introducing into the world an invention which would make further wars practically impossible...We thought governments would realize the impossibility of winning by surprise attacks, and that no country would enter into war with another of equal size when it knew that it would have to win by simply wearing out the enemy.”

Orville had a rueful but still optimistic opinion after that war ended: “The aeroplane has made war so terrible that I do not believe any country will again care to start a war.” However, by 1946, having lived long enough to witness a second world war, the invention of jet airplanes, and the dropping of atomic bombs, he was resigned to his invention being just one more tool of war.
Posted by David Mark at 5:53 AM