The intersection of Nason and Summer Streets was for decades a business hub for Maynard. This column is an exploration of the history of the four corners, including major fires in 1921, 1936 and 1955. The intersection is currently occupied by a park, a rentable hall over an exercise business, an apartment building and a hair salon under a fraternal society.

What is now the east end of Memorial Park, across from the end of Glendale Street, was the site of the first hotel in town, built in 1867, thus predating Maynard’s creation by four years. It opened as Glendale House. The name is claimed to have been taken from the “Glendale” wool blanket made at the mill. Street named after the hotel. Later renamed the Maynard Hotel and operating under that name until it was destroyed by fire on January 29, 1921. As not actually on the corner, there were buildings between the hotel and Nason Street. An 1875 map shows two houses owned by Mrs. Brooks. A later map shows other buildings labeled “lunch” and “upholsterer.”

After the hotel fire the land was bought by the town. Memorial Park was dedicated on November 15, 1925. More memorial plaques were added after subsequent wars. For a time, there was a public bathroom facility, built during the Depression as part of many federally funded work projects. The park is undergoing another metamorphosis to include a permanent performance platform (summer band concerts and other events) and a handicap-accessible ramp from the parking lot to the park.

The corner west of the park was occupied by a four-story wood frame building owned by the Riverside Co-op, built 1882. Prior to that it had been empty land owned by T. Brooks. The first floor was occupied by the cooperative, second floor used 1885-1918 by the Maynard Library, later Knights of Columbus and the Benevolent and Protective Order of Elks. Third floor had a hall where town meetings, graduations, rallies, dances, basketball and other types of social activities occurred, including the first moving picture shown in Maynard, November 1902. The fourth floor had a banquet hall. 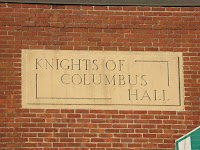 The building was severely damaged by a fire on January 30, 1936. It was rebuilt as a two-story brick building for the Knights of Columbus. KOC moved out in 2015 and Celia T’s, a rentable space with kitchen and bar facilities, moved in. Underneath is now Anytime Fitness, a franchised health and fitness club, open to members 24/7/365. It replaced an auto parts store.

The northwest corner was once occupied the Gove Bakery, later identified as the Cocco building, empty for many years, then demolished in 2003 for the construction of Jimmy MacDonald’s first apartment building. Hezekiah B. Gove started the bakery circa 1870; his son George N. Gove operated it into the late 1920s. Horse-drawn wagons delivered bread in Maynard and neighboring towns. Definitive information is lacking on how the building came to renamed, but it appears that it was the property of Marge Cocco, wife of Thomas Cocco, Maynard business man and Board of Selectmen member in the early 1970s. For many years the corner building hosted a candy/convenience store that went through several names: Gramo, Cox and Veleno. This was a popular stop-point for children attending Fowler and Roosevelt Schools. Next to it on the north side was a two-story building – restaurant? – and then the northernmost building, one story, Kangas Shoe Repair. All gone.

Between Gove’s bakery and the railroad was the extensive animal feed, lumber, brick, cement, horse carriages (and later, automobiles) business owned and operated by W. A. Haynes. This extended north along the tracks as far as the site of the current Cumberland Farms gas station. A 1939 Sanborn Map Company map in the possession of the Maynard Historical Society shows a smaller complex of buildings, named “Seder & Gruber Hay & Grain.”

The northeast corner was the Darling Block, after owner William Darling, built circa 1870. It was a three-story, wood frame, with a wrap-around porch and mansard roof (much like the Maynard Hotel). The Priest family operated Central Market, which occupied the bottom floor. An early tenant was the Maynard lodge of the Ancient Free and Accepted Masons, meeting there until relocating to 100 Main Street in 1888. The building had also been host to meetings of the local chapters of the Independent Order of Good Templars and the Ancient Order of United Workmen. These were all fraternal beneficial societies, offering members services such as life insurance and burial benefits. IOGT and AOUW were temperance (anti-alcohol) organizations. Freemasons did not drink at meetings, but might tipple on their own time; their definition of ‘temperance’ was and is that members, as a cardinal virtue, should ‘temper,’ i.e., manage and practice restraint of their behavior in all things.

At some point in time the Fraternal Order of the Eagles (FOE), which had established an Aerie in Maynard back in 1908, bought the building and occupied the second and third floors. The first floor was four store fronts facing Summer Street. At the time of a March 13, 1955 fire these were occupied by Goodrich Cleaners, Messier Photo Studio, Lawson’s Shoe Repair and the Beacon Press. The FOE had the building rebuilt as two-story cinderblock. Masciarelli Jewelry took over the first floor after the rebuild. The building now hosts Flawless Hair & Spa downstairs, upstairs spaces used for Alcoholics Anonymous meetings and other functions.

If you’ve been keeping count, that’s three fires for four corners of the intersection. Fires also took out the entire corner of Nason and Main Streets, the Riverside Block (Gruber Bros site) and five school fires. As to why Nason Street is so named, William Gutteridge’s 1921 history of the town states that it was named after Reverend Elias Nason of Billerica in homage of a popular lecture published in 1875 called “The Model Town of Massachusetts.” Summer Street is by far the older of the two, construction and naming lost in the mists of history. The oddity for that one is that it becomes Pompositticut Street once it crosses into Stow. But then, before being incorporated as a town in 1683, Stow was known as Pompositticut Plantation, so in colonial days the road was named after the place it was going to.