Maynard’s various histories/futures name nine co-operative associations or societies. The oldest was Riverside, the newest Assabet Co-op Market. The longest duration and largest was the United Co-operative Society. A Department of Labor report for 1947 mentioned that United was one of the top ten co-ops in the country for membership and annual sales. More than half the households in Maynard were members.

The backstory of co-operatives began in 1844 when a group of 28 weavers in Rochdale, England, organized the Rochdale Society of Equitable Pioneers, “…and opened their first store, with a small stock of flour, oatmeal, butter and sugar.” They soon added tea, tobacco and candles. Their guidelines formed the basis for the principles on which co-operatives around the world continue to operate. The Rochdale Pioneers became highly successful, with 1,400 members by 1855 and 5,560 members by 1870, able to shop at many stores.

There had been earlier attempts to establish co-operatives that were basically buyer’s clubs, which by pooling their purchases were able to buy at wholesale prices and sell to members at below retail prices. The Rochdale Pioneers innovated by adding profit-sharing to members based on a percentage of the cost of the goods the members purchased, i.e., a patronage dividend. The seven Rochdale Principles: Open membership, Democratic control, Distribution of surplus money, Limited interest on capital, Political and religious neutrality, No buying on credit, and Promotion via education.

Here in Maynard, Riverside was started in 1875 by English and Scottish immigrants. Many of them may have been familiar with the co-operative movement in Great Britain. Riverside began as a chapter in an American movement, the “Order of the Sovereigns of Industry.” This was an urban workers organization modelled on the Grange – a farmers’ organization formally known as the “Order of Patrons of Husbandry.” ‘Sovereigns’ was in effect a buyers’ club. Nationally, the Sovereigns organization faltered under financial mismanagement, but in 1878 the local chapter reformed itself as the Riverside Co-Operative Association, incorporating Rochdale principles.

Shares were $5 each (equivalent to about $125 in today’s dollars), members limited to 60 shares. The total capital investment was $1,500. Per the by-laws, regardless of how many shares owned, each shareholder had one vote. The operation started in the basement of the Darling Block building, moved to the Riverside Block (later Gruber Bros Furniture), and then in 1882 built its own building at the southwest corner of Summer and Nason. The building was a four-story wooden edifice, with the store entrance on Nason Street. The other floors were rented out.

By 1909, Riverside had more than 600 member families. In addition to quality of goods and competitive prices, members were paid a yearly cash refund ranging from 2 to 10 percent based on how good a year the co-op was having. Additionally, shares earned five percent interest. A decline started with the recession of 1920, compounded by cost of repair after a fire, same year. In 1929 the store business was sold to the store manager while the co-op continued to own the building. A large fire in January 1936 led to dissolution of the Association and sale of the site to Knights of Columbus, which had been a long-time tenant. Proceeds were divided amongst the remaining shareholders.

Contributing factors to the end of Riverside were that the children of the founders were moving up the socio-economic ladder at same time as immigration from England and Scotland was declining. A front-page newspaper article from 1913 had noted that prior to 1900 the town was mostly English origin, but expansion of the mill under new ownership had doubled the town’s population by bringing in large numbers of immigrants from Finland, Poland, Lithuania and Italy.

Of the smaller and shorter-lived efforts, Suomalainen Osuuskauppa was started 1899 by Finnish immigrants. Capitalized at only $800, it lasted a year before dissolving and selling its store to a private owner. The Maynard Co-operative Milk Association was formed in 1914. Three years later it become the diary operations of Kaleva Co-operative Association. Finnish members of the milk co-op who had not wanted to affiliate with the socialist/communist/atheist Kaleva had previously split off and formed the First National Association in late 1915. It owned and operated out of a building on the west corner of Main and River Streets until its demise in 1941. The International Co-operative Association was started in 1911 by immigrants from Poland, and lasted 20 years. It began in a building near the Methodist Church, later moved to space in the Masonic Building (100 Main Street). Membership numbered 200 to 400 over the years. First National and International failed in part because of extending credit to members during the Great Depression. The Historical Society has a share certificate for the proposed Russian Co-operative Association, dated 1917. The group did not reach its capitalization goal, instead operating briefly as a store co-owned by six Russian men.

As for the largest and longest lasting - “Kaleva” refers to an ancient, mythological, Finnish ruler known from a 19th century work of epic poetry and story-telling compiled by folklorist researcher Elias Lonnrot. The work, “The Kalevala,” is regarded as the national epic of Finland, instrumental in fostering a sense of Finnish national identity that culminated in the Finnish declaration of independence from Russian rule in 1917. Locally, immigrants had formed the Finnish Workingmen’s Socialist Society in 1903, from whom the 187 founders of the co-operative were drawn. 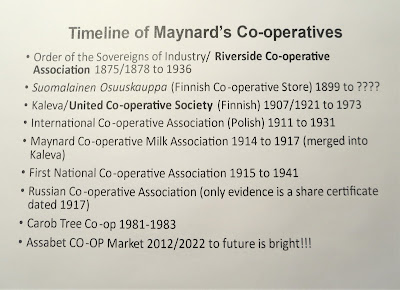 According to a book, “The Finnish Imprint,” a delegation of Finnish immigrants had initially approached the Riverside Co-operative Association with the idea of becoming members. Because many of the recent immigrants did not speak English, they asked that the co-operative hire Finnish store clerks. This suggestion was rebuffed, with a reply that if they did not like the service they received, they should start their own store. They did. The business was initially capitalized at $1,600 from sale of 320 shares at $5 per share. The initial location was a rented storefront at 56 Main Street. By 1912 the co-operative had bought the entire two-story building, soon after added a bakery operation, a dairy with home delivery, and a restaurant on the second floor, serving meals to hundreds of workers living in neighboring boarding houses.

United’s by-laws had added an eighth principle to the previously describe Rochdale seven – Continuous expansion. Over the initial 50 years membership grew from 184 to 2,960 members as coal and firewood (1924), fuel oil (1933) and ice (1934) delivery were added. In addition to the Main Street store, a branch store was opened on the northeast corner of Waltham and Powdermill Roads (1926), superseded by moving the branch store operations to a new building at the northwest corner of the same intersection (1936). This remained active until it was sold to Murphy and Snyder printers in 1957. Next door, now the Seven-Eleven/Dunkin store, was an automobile gas and service station (1934). A credit union was added in 1948.

A report by the U.S. Bureau of Labor at that time stated that the United Co-operative Society of Maynard was one of the ten largest in the country, calculated either by number of members or annual sales, and was also one of the ten oldest. More than half the households in Maynard belonged to United. At its peak, the co-operative had more than 50 full-time employees, with medical benefits and life insurance – unusual for that era.

United survived the competition from an A&P supermarket operating on Nason Street (in the building now housing The Outdoor Store), but the presence of Victory Supermarket on Powder Mill Road, combined with the freedom to shop elsewhere provided by increasing car ownership, put pressure on the co-operative. In June 1973 that was a near-unanimous vote to dissolve. United's By-laws had an interesting clause: On the occasion of dissolution, the assets would be used to pay the purchase value of the outstanding shares. Any surplus would go to the Co-operative League of the United States rather than to members.

And now, there is an effort underway to launch Assabet Co-op Market: “Our mission is to support the regional food system; strengthen the local economy; promote the well-being of our members, our community, and the environment; and be a center of community activity.”

The beginnings date to February 2012, when a small group of people met to discuss forming a co-op. The cost of membership was set at $200. To date, more than 1,700 people have joined. The co-op has achieved its capitalization goal of $2,000,000 in the form of interest-paying owner investment, which in combination with traditional bank financing will be sufficient to lease space at Victory Plaza, 86 Powder Mill Road, Maynard, and then convert it into a store with approximately 6,000-square-feet of retail space (with free parking).  Once launched, Assabet Co-op Market intends to make a point of sourcing food from local farms. And if all goes as planned, Maynard will once again be a co-operative town, 145 years after the start of the first.

On December 14, at 7:00 p.m., the Maynard Public Library will present a Zoomed talk titled: “Maynard’s Many Co-operatives.” Register at https://www.maynardpubliclibrary.org/may150.