The End of a Newspaper (Maynard, MA)

A few years back, I stepped out our front door to get the Sunday New York Times, which is delivered in a blue plastic bag. Across the street was my neighbor and his young son. The boy pointed to what I was about to pick up, and asked "What's that?"

His father answered "Mr. Mark gets a newspaper delivered to his house every morning. It's inside the bag."

Then, the boy asked, "What's a newspaper?"

And now, this announcement: “The Beacon-Villager will cease publishing a print newspaper and will instead exclusively offer news online at www.wickedlocal.com/beaconvillager, on social media, via digital newsletters and other platforms. The final print edition of The Beacon Villager will be May 5, 2022.” Thus ends 135 years of Maynard having a print newspaper. The transition is not unique. Weekly newspapers of some neighboring towns (Acton/Boxborough, Sudbury, Chelmsford/Westford) will also cease. The Concord Journal and Lexington Minuteman will remain in print – as least for now. 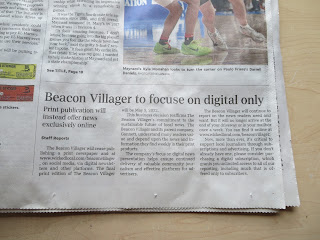 These were GateHouse Media/Gannett Co. decisions. Across the country, GateHouse owned more than 100 daily newspapers, including MetroWest Daily News, and hundreds of weekly town newspapers.  In November 2019, GateHouse acquired Gannett, making it the largest newspaper publisher in the United States, and in the process assumed the Gannett name. Gannett is a publicly traded company, but it is managed by Fortress Investment Group, which in turn is owned by the Japanese-based, international conglomerate, Softbank.

There have been trends that foretold the end of print. The Beacon-Villager, serving Maynard and Stow is a weekly. It shows up Thursdays, home delivery and in stores. Starting in December 2021 it had shrunk to 12 pages, down from 16, but in recent past had been 24 pages. Here and across the nation, the demise of print advertising tore the financial hearts out of newspapers. Subscriptions to digital-only versions have not replaced lost revenue. According to an article in the Washington Post, more than 2,200 local newspapers have closed in the past 15 years, creating “news deserts” for some regions. Not surprising consequences from a decline in local news coverage are declines in civic engagement of citizens, less competition for local office and lower voter turnout for local elections.

Maynard’s history of having its own weekly newspaper dates back 135 years. “The Enterprise Weekly” later renamed to “Maynard Enterprise,” started print in 1888. Individual copies were three cents, a year’s subscription $1.50. Advertisements are interesting reading: Distasio’s Market offered beef at 15-25¢ per pound. Lerer’s Clothing Store had men’s shoes for $2 and suits for $10-20. An oak dining room table with six chairs for only $25. Ford Motor Company offered car models starting at $700. To put all this into perspective, factory pay was less than two dollars a day. The Enterprise ceased publication in 1970.

“The Maynard News,” a weekly published in Hudson, serviced the towns of Maynard, Hudson, South Acton, Stow and Concord Junction (West Concord). It started in 1899, ceased publication in 1943. What is surprising is how little actual “news” was in the paper. Week after week, the pages were filled with announcement-type items, such as a wrestling match at the Finnish Hall, a lecture on the “White Slave Trade,” engagement announcements and school concerts. Apparently, the main function of the newspapers of a century ago appears to have been akin to what we now think of social media - personal items people wanted to share with the community. Most of the old issues exist as bound folios at the Maynard Historical Society and on microfilm at the Maynard Public Library.

“The Beacon” was the forerunner of the Beacon-Villager. It launched in 1945. In the summer of 1953, the Beacon Publishing Company was the first business to move into Maynard’s mill after the conversion from woolen factory to rentable office and industry space. As “The Beacon” and later “The Assabet Valley Beacon” it served several towns. In time this evolved to papers for each town, including Acton’s “Beacon,” the “Concord Free Press” and the “Sudbury Citizen.”

How Wickedlocal digital will work for Maynard and Stow is not entirely clear. Until now, the digital version of the Beacon-Villager has been free. Going forward, not clear if part of the content will continue to be free and part by paid subscription, or all within paid. There appears to be an introductory subscription offer of $1 for the initial six months, then $7.99 per month thereafter. The digital appearance may emulate the layout of a printed paper.